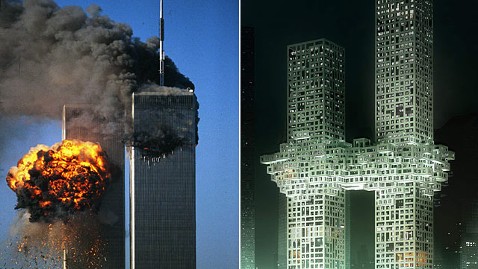 At right, an artistic rendering of two luxury buildings designed by MVRDV. They are connected by a "cloud" on the 27th floor. Some say the design is eerily similar to the disaster at the World Trade Center, left, on 9/11. (Peter C. Brandt/Getty Images; MVRDV/AP Photo)

The new luxury building, slated for completion in 2015 in Seoul, South Korea, will featured a “cloud” connecting two towers at the 27th floor.

But some say that The Cloud, which will feature a large connecting atrium, a wellness center, various pools, restaurants and cafes, looks far too similar to the explosion at the World Trade Center on 9/11 after two planes flew directly into the twin towers.

“A real media storm has started and we receive threatening emails and calls of angry people calling us al Qaeda lovers or worse,” the company posted on its Facebook page.

Hundreds of outraged commenters took to the company’s Facebook page, such as Lance Henley, who wrote, “It looks like the WTC exploding on impact, how could anyone be such a moron…if it goes up it’ll come down just as fast.”

But others suggested the comparison was far-fetched.

“Everyone should remember that the World doesn’t revolve around the US or 9/11. They have their own things going on to think about and worry about to honestly remember what the buildings looked like coming down and all that. Stop acting like the world revolves around the US,” wrote Ricky Arellano.

The Cloud was reportedly inspired by a drawing of two towers with a cloud covering the center of the skyscraper.

On their website, the company wrote, “MVRDV regrets deeply any connotations The Cloud projects evokes regarding 9/11.”

This was designed by Daniel Libeskind, most famous for being selected by the Lower Manhattan Development Corporation to oversee the rebuilding of the World Trade Center As all his constructions are very subjective for the Ground Zero project, he felt a personal link with these buildings, he had assisted their construction, his brother had worked on it, and his father worked near the tours towers. So he considers that he knows well how to rebuild it. He wants to put a memorial in the center of the project always in the idea to respect history (and to continue its work of memory). He wants the buildings that will rise on this place to wear the testimony of this tragedy.

I find it extremely odd that Daniel Libeskind's name is not mentioned at all in the article I posted.  It is presented as a creation of MVRVD, odd to the point of misrepresenation.

seems almost contradictory to the background you give us on Libeskind, who knows very much about the Twin Towers and 9-11, contractictory to the point of deception.

More of the complete official respose by MVRVD is found here

From what you tell of us Libeskind's familiarity with 9-11 and the Twin Towers and Ground Zero, no way he did not know exactly what he was doing when he designed "The Cloud."  I perceive serious deception here.