Review of Dimiti Khalezov's work on the WTC destruction. Pt. 1

Dimitri A. Khalezov is former Soviet Officer Specializing in Nuclear Intelligence, specifically identifying the seismic signature of underground nuclear weapons tests around the world. He claims to be a witness to Emergency Nuclear Demolition Schemes for large steel structures.

He contends that nuclear devices were maintained deep under the WTC Towers and WTC7 and other large buildings such as the UN, and the Willis Tower, for use in their efficient pulverization in the event it was needed (or in our case politically expedient ).

One problem is though he claims to have knowledge of this scheme since the 80's, his research seems to be built upon, or formulated after other researcher's work on the problem of "dustification" a word he credits to Dr. Wood who originally coined the term. If he had such a head start with his inside knowledge where was he on September 12th?

Deep underground nuclear tests contain the flash, radiation, blast energy and EMP of a weapon. There is a certain diameter of vaporized rock which exposes surrounding rock in a larger diameter to crushing over-pressure which is crushed in place to 100 micron dust, loosing all of it's structural integrity, but remaining in place. An even larger diameter sphere or oval of rock in partially crushed.

If the depth/weapon size ratio is not sufficient the cavity elongates toward the surface in the direction of least resistance, and forms a propagating supersonic crush front which if calculated correctly would be coupled to the foundations of a building and continue propagating up the building, crushing it in place before it finally falls apart. 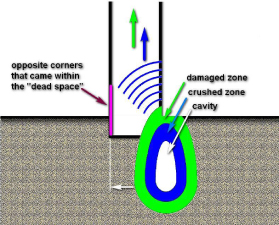 In the case of the WTC the devices would be 150 kiloton (10 Little Boys). He goes on to explain how the lower 80% of the building, and the remaining upper floors ( which he calls heavy) fell more intact and was the source of larger steel in the pile. Again he is roughly in agreement with Dr. Wood's estimation of "macro" rubble and steel remaining after the event.

"The last thing that went absolutely unexpected was this: the upper parts of the WTC Towers were not only damaged to a much lesser extent in comparison with the lower parts of the Towers (as mentioned above). It was also partly due to the “injuries” inflicted to the steel structures of the Towers by the two alleged “terrorist planes’” impacts. Since the alleged “terrorist planes” (or to be more precise – cleverly positioned hollow-shaped charges that should produce a hole matching that of the plane’s silhouette) have obviously severed some perimeter structures, they created an additional “unexpected” gap between the lowest parts of the Towers (below the spot of the alleged impact) and their upper parts (above the spot of the alleged impact). This “gap” has apparently played an additional role in decreasing to a certain extent developments of the “damaged” and “crushed” zones by the upward vector. While the Tower’s structures below the impact spot were “dustified” almost completely, parts of each of the Towers above the impact spot were damaged to a much lesser extent and remained more or less rigid and heavy pieces of the structures."

Is this what the evidence we have suggests? Didn't the South tower topple above the gash? Did it hit the ground? I don't think the evidence supports that. He does explain the remaining several stories of outer wall was the result of the underground nuke being off to one side for logistical reasons. (See above pic.) Still it seems that there was more large debris from the lowest (and thickest) steel. This is a concept he hasn't grasped, the actual design of the towers, he assumes the steel was uniformly thick, apparently he hasn't seen the more recent and excellent work of Chuck Boldwyn http://911scholars.ning.com/profile/ChuckBoldwyn?xg_source=activity
showing the Tower's tapering steel as there is less weight on higher floors. 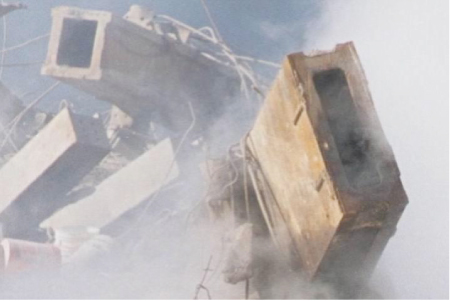 -These are obviously from the lower parts of the buildings. 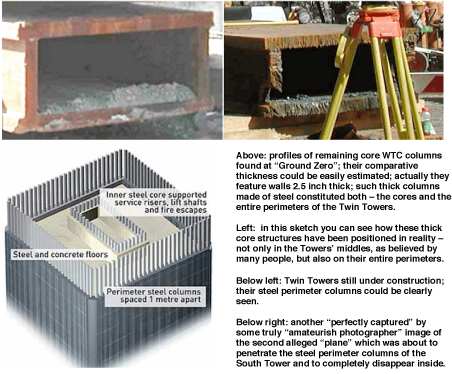 - The columns were actually ~18" apart
and the core is wrong here.

I've got it cued up, now, TY, right after Kevin Barrett and Gordon Duff talking on Kholozov. (With a Khalezov cameo at the end.)

It's an absolute must hear: http://www.americanfreedomradio.com/archive/Truth-Jihad-32k-021111.mp3

Get on Barrett's show feller!

I just did Jim Fetzer's "Real Deal" Show last thrusday on the different theories that attempt to accound for the demise of the 3 Towers. You should be able to listen to it by the middle or end of next week.

I am scheduled for another show with Jim, probably this upcoming week on my updated Posters, which I have been doing in Power Point and some are recently posted, with more to come before our next show.

Down with all of the Traitorous Scientists who are defending the Government,

all of them Frauds or just plain Ignorant Fools

Thanks, Chuck, I've just received AP's latest book, which is available, (unlike Dimitri's) at http://www.anonymousphysicist.com/911_Q_Updated.htm

While this article is interesting, it wouldn't be possible to hide above ground nuclear devices,

and there is no evidence for "China Syndrome" heat in the rubble (except dodgy testimony and NASA infrared images). AP used to say this was fission bombs but now endorses fusion bombs. Fusion bombs definitely would not cause China Syndrome. I'll let you know how the book is.

Please check out article by "Anonymous Physicist" on Dimitri Khalizov and the take on the nuking of the Towers x 3.