11 Years Later---And Now for Something Different - Courtesy of Spooked.

I have long suspected WTC 7 was dropped in an awaiting hole. While I am skeptical of the 'residual heat' lingering long at the site, and the ridiculous thought of 'China Syndrome',  perhaps AP has had a moment of clarity here...

11 Years Later---And Now for Something Different

On a discussion board a couple of days back, there was some guy I argued with about WTC7, who said he was at Ground Zero and WTC7 collapsed because of tunnels underground that collapsed from the twin towers going down. He was very difficult to get detailed information on this point from, so it was frustrating, but he was also very insistent that this is what happened. I pointed out how this is not the official govt story and basically no one puts forward this model. However, I did later remember this piece AP wrote, where he speculated on tunnels underneath WTC7:

We know that most, if not all of the videos of the two "plane hits" of the twin towers have been altered, or are simply computer generated. Having said that, here is a fairly complete set of several videos from different locations and angles showing WTC7 destruction. Can we contrast this with video of a conventional demolition of a similarly shaped wide skyscraper? See this demolition of the 32-storey, "wide-body" Stardust Casino in Las Vegas. Ignore the added Vegas fireworks. Notice how the entire (all the way up to the top) central structure all falls down, from the very onset of demolition, with the sides collapsing on top of this at the end. Notice also that the moving plumes of smoke start after the entire edifice has hit the ground. Contrast the latter with WTC7, which had much larger plumes of smoke flowing certainly at the start of demolition, and perhaps apparently even before (from basement explosions?)

But perhaps the most striking difference is in the near perfect, intact, ensemble "sliding down" of the upper floors of WTC7. With the exception of the initial collapse of the central penthouse, and an apparent initial kinking of the top left area of WTC7, we see an almost miraculous, perfectly uniform, even collapse. I assert that this is a demolition unlike any other, for many reasons. But the usual destruction of mere supports does not appear to be involved here. Rather whole levels of structure below the visible top floors appear to have been vaporized-more on this later. Now we appear to see at least the top 20 floors or more just coming down as an intact ensemble. What can account for such near-perfect uniformity? We don't see this in other CDs of similarly shaped buildings. Indeed, in other CDs, we saw that the initial central collapse followed by the outer portions falling inwards is created by the CD planners for the final footprint result, and occurs at the onset of CD. Assuming the videos are (somewhat) genuine, was the initial, central, rooftop penthouse "collapse" a clever way to get people to think the whole thing was occurring like other controlled demolitions? When the rest of it is not. (Or was the Penthouse coupled to something in the basement, or the lowest floors?)

Part of the problem of analyzing the WTC7 CD, is the fact that smoke, and other buildings, obscure what happens to the bottom half. A chemist, Frank Legge, PhD stated that the upper floors of WTC7 came down just slightly slower than freefall speed in a vacuum (6.2 vs. 6.0 sec.). (snip)

The following section is to be regarded, at this time, as purely speculation, and is not essential to this article on the demolition of WTC7. This speculative hypothesis (apparently published here for the first time) relates to the nuclear demolition of WTC7, and possibly the other WTC buildings. The following speculation could provide for the necessary nuclear reactors which provided either the explosive nuclear material (Tahil hypothesis), or more likely, IMO, the source for heat GENERATION weeks and months later to explain all the hotpsots, and molten steel observed at such later dates-as late as February 2002. Note that this section is not necessary for the whole of my WTC Nuclear CD Theory, as I have already stated that blasted, unexploded mini-nukes could have provided for the nuclear reacting criticality sites, and resultant hotpsots. I write now of the remarkable Nuclear Borer. A photo of which is here- note it states that 42 levels were bored out by the Nuclear Borer. Here is the public patent granted in 1972.

A discussion of the Nuclear Borer is here. I am only concerned with what is spoken of at 2:35 seconds in. I will not comment on the rest of this video. I am only concerned with the depiction and knowledge of the Nuclear Borer. Note that the 1972 public patent states, "The heat source can be electrical or nuclear but for deep drilling is preferably a nuclear reactor." We must note that if this remarkable military device had a PUBLIC patent granted in 1972, it must have been used much earlier. And it is highly likely that 30 years later, in 2001, there would have been much faster, more powerful, smaller versions in existence. Other eyewitnesses have stated that this is precisely the case, and they have been used to quickly construct massive, very deep (thousands of feet), underground, connected bases- but this is beyond the present discussion.

This Nuclear Borer speculative aspect of my WTC nuclear demolition theory perhaps resolves the last piece of the puzzle, as follows. Apparently few people seem to be concerned with the fact that the molten steel at the WTC weeks and months later should require a source for the GENERATION of such heat, weeks and months later. I had hypothesized that these great hotspots (deep) underground were nuclear criticality sites from blasted, but unexploded mini-nukes. But the fact that there are so many of these hotpsots indicates that these may not have been "accidents"/mishaps; rather the resultant hotpsots may have occurred because their source was built into the demolition scheme itself. The nuclear reactors in the Nuclear Borers appear to fill this last piece of the puzzle quite well. But the earlier hypothesis of nukes blasting unexploded other mini-nukes, resulting in nuclear-reacting criticality hotspots may still hold. In more detail, regarding this Nuclear Borer hypothesis, the requisite 20 or more floors were drilled out in the sub-basement, with stability left in, until that was exploded by the mini-nuke(s) at 5:30. The drilling-out was possibly done that day, after evacuation after the "plane hits". Perhaps this "perfect ensemble collapse" was perpetrated to reinforce the claim that the two towers came down via gravitational pancaking. Maybe the powers that be thought it would be easier for the masses to swallow this, if they "collapsed" at least one of the buildings--which by then had many video cameras trained on it--to look like a gravitational pancaking--which the END result does, as does a superficial understanding/viewing of the WTC7 "collapse" itself. But recall all the chaos in the nuking of WTC 1 and 2. Recall the whole chunks breaking off, and that massive, separated top part of WTC2? Did the WTC1, 2 "collapses" look anything like the perfect ensemble "collapse" of WTC7? Or did WTC7 demolition, look anything like any other demolition? So perhaps the WTC7 demolition fell as such a "perfect ensemble" because it fell into its own perfectly drilled-out footprint! Nukes provide for lots of "uneven" chaos. Perhaps only a perfectly drilled-out hole could have accounted for the perfect ensemble collapse--drilled out by the Nuclear Borer (or successor device).

Let us look at the history of the WTC, and the nuclear Borer. The WTC was built in the late 60's and early 70's, when the Nuclear Borer had already been used for some time in drilling out underground nuclear bomb cavities. One possibility in my Nuclear Borer Speculation is thus that Nuclear Borer(s) could have been used at the WTC during its construction, and left in place for use during its destruction! Another possibility (as per the above) is that one of them--or a more potent, yet smaller, successor device--was very busy underneath WTC7 for some 6-7 hours, drilling out sufficient sub-basement floors to allow the unique ensemble collapse of WTC7 at around 5:30 P.M. This may answer numerous questions: Could this be why they took so long, after the other buildings were destroyed? Could some unexpected problem in the use of the Nuclear Borer be the reason that the PTB gave the media too early a time for the destruction of WTC7? Could the exploded nuclear reactors in several Nuclear Borers, and their still critical components be the underground source for the many hotspots and molten steel weeks and months later? Could the Nuclear Borer's reactors be the fission reactors that William Tahil hypothesized? I always thought his hypothesis had some merit, but didn't quite fit. Unlike Tahil, I believe that mini-nukes (fusion devices) brought down the towers, and possibly all the other WTC buildings and now WTC7 too. And these nukes could have also exploded the reactors in the Nuclear Borers which may have been used to drill out necessary parts of each of the WTC buildings for the other nukes to do their thing. In particular, extensive Nuclear Borer drilling may have occurred some time before WTC7 destruction, perhaps that late morning and afternoon. This allowed for that most unique "falling in its own footprint" "collapse" ever to be seen. WTC7 did fall through its own footprint once demolition began; as many underground floors had been bored out and a mini-nuke set-off underground or at a lower floor above ground initiated its unique destruction. It then indeed proceeded to fall through its already drilled out footprint-deep underground! This ends the Nuclear Borer Speculative Hypothesis, which is not necessary for this WTC7 nuclear demolition article, as a whole.

(emphasis added) Food for thought, for sure!
Tunnel Boring Machines: 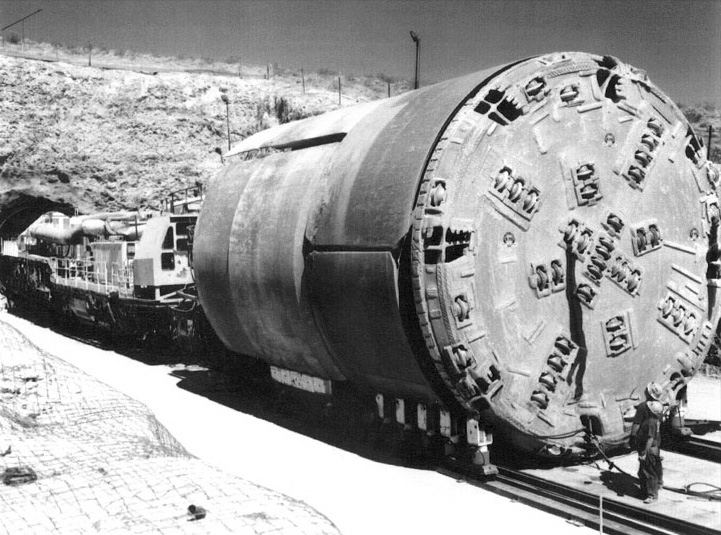 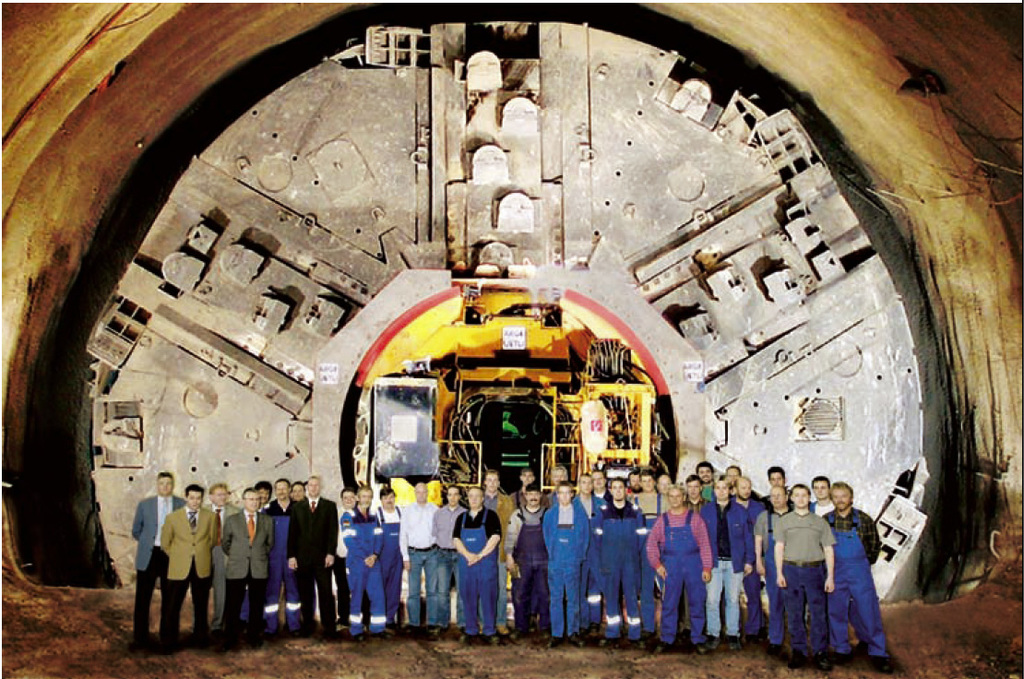