‘Fake news’ & ‘post-truth’ politics? What about those Iraqi WMDs?

Neil Clark is a journalist, writer, broadcaster and blogger. He has written for many newspapers and magazines in the UK and other countries including The Guardian, Morning Star, Daily and Sunday Express, Mail on Sunday, Daily Mail, Daily Telegraph, New Statesman, The Spectator, The Week, and The American Conservative. He is a regular pundit on RT and has also appeared on BBC TV and radio, Sky News, Press TV and the Voice of Russia. He is the co-founder of the Campaign For Public Ownership @PublicOwnership. His award winning blog can be found at www.neilclark66.blogspot.com. He tweets on politics and world affairs @NeilClark66 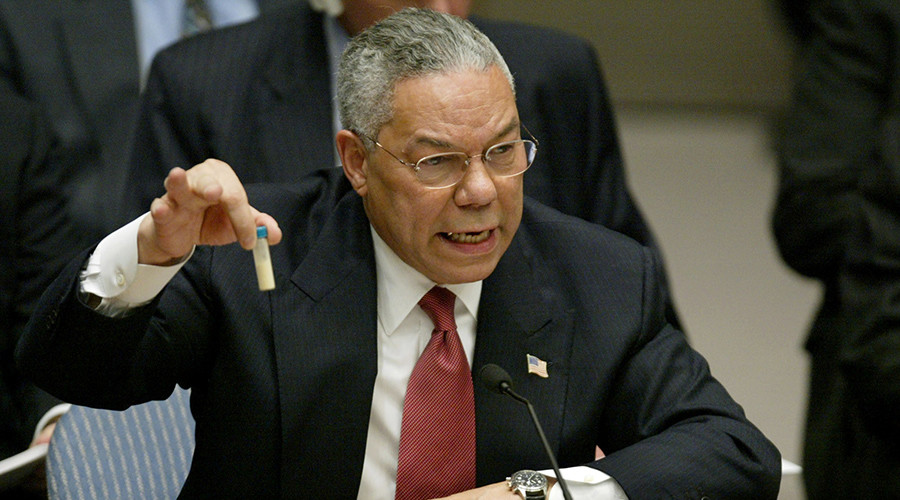 FILE PHOTO: U.S. Secretary of State Colin Powell holds up a vial that he described as one that could contain anthrax, during his presentation on Iraq to the U.N. Security Council, in New York February 5, 2003 © Ray Stubblebine / Reuters The Oxford Dictionaries have named 'post-truth' as the word of the year. ‘Fake news’ and ‘post-truth’ politics have been blamed for both the Brexit vote in the UK and the victory of Donald Trump in America.

It seems the uneducated plebs are falling for ’fake news’ they read in ’new media’ and the lies of dreadful rabble-rousing populist politicians who are relying on people’s emotions, instead of ’objective facts,' to get votes. It’s all terribly worrying and poses a dire threat to Western civilization as we know it.

Well, forgive me for laughing out loud. For this establishment 'fake news'/'post-truth politics' concern is the funniest thing I’ve come across in politics since Lord Jenkins of Hillhead, the very grand Chancellor of the University of Oxford, repeatedly called distinguished Sheldonian guest Mikhail Gorbachev, "Mr. Brezhnev."

Without a doubt the best, or rather the worst example of ‘fake news’ in the last 25 years or so, was the neocon lie that Iraq had WMDs in 2002/3. That wasn't peddled by ‘obscure bloggers’ and 'new media,' but by mainstream Western politicians, from ‘mainstream’ political parties, establishment-approved 'experts' on the BBC/ITV/CNN, etc., and Op-ed columnists in ‘serious’ and 'respectable' media outlets.

There was absolutely no evidence that Saddam possessed WMDs. The story was complete and utter BS. Yet this fake news dominated the headlines for months in 2002/3 and led to an illegal invasion in which many people lost their lives. Unlike today’s manufactured ‘fake news’ hysteria the Iraq war was no joke. An entire country was destroyed.

And guess what? Those who pushed the ‘Iraq has WMDs line’ are now coming on television to express their concern over ‘fake news’!

John Hilley notes"The BBC even had Alastair Campbell (Tony Blair’s spin doctor), in the studio defending the term 'post-truth' as a way of exposing the 'dangers' of 'fake news.'"

Campbell stated: "It's acknowledging that politics, which has always been rough, has moved to a different phase where politicians who lie now appear to get rewarded for it." (BBC2 Jeremy Vine Show, 16/11/2016).

What might Orwell have said about Campbell, master spinner and Blairite warmonger, sitting inside the BBC being rewarded for his thoughts on 'post-truth and 'fake news?' Hilley asks.

Once again, I'm sure old George is spinning in his grave in Sutton Courtenay.

Then there’s that serial warmonger Bernard-Henri Levy. The Sunday Telegraph today told us in its headlines: 'Leading French philosopher: Marine Le Pen may win election as people have lost interest in whether politicians tell the truth.'

Because if the French people really have ‘lost interest in whether politicians tell the truth,’ Henri-Levy and his fellow liberal interventionist ‘regime changers’ have got a lot to do with it.
Think back to the war against Libya, which the ‘leading French philosopher’ lobbied hard for. To sell the war to the Western public, we were told that Muammar Gaddafi was about to commit a ‘Srebrenica-style’ massacre in Benghazi. Media Lens noted the claims that were made at the time.

But again it was a load of 'rollocks.' Five years after Libya, like Iraq before it, had been destroyed by Western ‘interventionists,' a report of the Foreign Affairs Committee of the House of Commons declared: "the proposition that Muammar Gaddafi would have ordered the massacre of civilians in Benghazi was not supported by the available evidence."

It wasn't the only claim made about Libya by Western politicians that was ‘not supported by the available evidence.' In February 2011, UK Foreign Secretary William Hague insisted that he had seen ‘information’ which suggested that Gaddafi was on his way to Venezuela. An unnamed ‘diplomat’ said that this was ‘credible information.' But it wasn’t. It was the same old fake news that we get every time the Western elites are trying to achieve ‘regime change.’

In April 2011 we heard that the devilish Gaddafi (who had not, after all, fled to Caracas), was supplying his troops with Viagra "to encourage mass rape."

“Gaddafi’s security forces and other groups in the region are trying to divide the people by using violence against women and rape as tools of war, and the United States condemns this in the strongest possible terms,” declared Secretary of State Hillary Clinton, whose supporters are now complaining about ‘post-truth politics.

Again, no evidence was put forward for the Viagra/mass rape claim and, surprise, surprise, none was ever found.

A clear pattern can be discerned. To get public support for its illegal regime change wars, the Western establishment energetically promotes a number of ‘fake news’ stories. These stories are usually reported unquestioningly in ‘respectable’ outlets and are regularly cited by neocon/liberal interventionist commentators as a reason for taking action against the target state. ‘Anonymous’ sources feature heavily in these stories, which like MI6’s ‘Operation Mass Appeal’ are often planted by the security services.

Meanwhile, people’s emotions are shamelessly played upon by the ‘something must be done’ brigade of ‘liberal’ laptop bombardiers, the same crowd, note well, who accuse ‘populist’ politicians of ignoring ‘objective facts’ and playing on people’s emotions.

The fake news continues while the regime change operation is ongoing. After its over, we’re all meant to forget about the false stories we were fed and focus on the next ’New Hitler’ who needs to be dealt with. In 2011, it was the despicable Gaddafi, now it’s the despicable Assad and the despicable Putin who we’re told: "have to be stopped."

The term ‘post-truth’ politics implies there was a time when politics was truthful. I doubt if that ever was the case, but certainly in the last 25 years, thanks to the influence of neocons and ‘liberal interventionists’, the lies have been off the scale. Remember the Niger uranium forgeries? And Saddam's horrific ‘People Shredder'?

And before the Iraq war, we had the ‘humanitarian’ NATO bombing of Yugoslavia, where again fake news dominated. US Defense Secretary William Cohen claimed"about 100,000 military-aged" Kosovan Albanians were missing… "they may have been murdered."

As John Pilger reminded us, "Kosovo, the site of a genocide that never was, is now a violent "free market" in drugs and prostitution."

It wasn’t the only lurid claim that was made to sell the war. But again the ‘genocide’ and hundreds of thousands killed stories were false, as a UN court itself ruled in 2001.

Fake news also featured heavily in the neocon campaign to get Iran sanctioned for an entirely unproven nuclear weapons program. It’s dominated the coverage of recent events in Ukraine, with Russia’s non-existent ‘invasion of Ukraine’ routinely referred to as a fact. The conflict in Syria too has been marked by 'fake news,' and theories being reported as if they’re 100 percent proven. How many times have you read that "Assad gassed his own people" at Ghouta in 2013, even though we still don’t know for sure who carried out the attack?

If it's ‘official enemies’ we’re talking about ‘fact-checking’ and citing sources isn’t all that important for those who pounce on a mere typo if it's an anti-war writer who's making a claim.

Now, the same people who have disseminated fake news for so long and who are still, even after Iraq and Libya, embedded in the West’s political and media establishments, are lashing out because they no longer control the narrative as they used to. The public is getting their news from a much wider variety of sources and voting for ‘populist,’ i.e., non-neocon/liberal interventionist-anointed candidates/parties at elections.

Instead of admitting that it’s their ’fake news’ and ‘post-truth politics’ which has caused people to switch off from establishment media and to stop voting for status quo candidates, the endless war lobby has the effrontery to accuse others of the things they have been guilty of.

Concern over ‘fake news’ and ‘post-truth politics’ from the West’s endless war propagandists?
It’s hard to think of a better example of what psychologists call ‘projection.'

The statements, views and opinions expressed in this column are solely those of the author and do not necessarily represent those of RT.