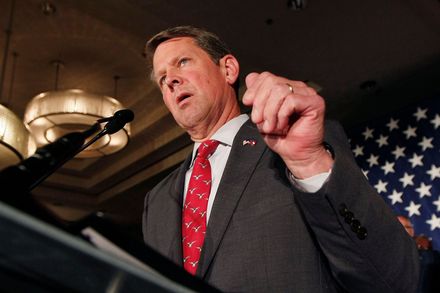 Republican gubernatorial candidate and current Georgia Secretary of State Brian Kemp incorrectly canceled some 340,000 voter registrations, according to a recent investigation. Although Kemp claimed the voters left the state of Georgia or moved to another country, they hadn’t, Greg Palast, who filed suit against Kemp, wrote in Truthout.

According to John Lenser, who is CEO of CohereOne and who led a review of the list of purged voters for Palast, “340,000 of those voters remained at their original address. They should have never been removed from the voter registration rolls.”

Palast only obtained the list after he filed suit against Kemp. “It began five years ago, when Kemp stonewalled my first requests for information on purges in Georgia, first for Al Jazeera and Rolling Stone, now for Truthout and Democracy Now!” Palast wrote, “It took my lawyer’s threat of a federal lawsuit, filed last week in Atlanta federal court, to blast the list of the electorally doomed from Kemp’s hands.”

After he received the list, Palast said he analyzed it and discovered that 340,134 voters were purged when they shouldn’t have been. To do this, he consulted experts who cross-referenced voter data with a number of other databases including cell phone bills and tax filings to see if, in fact, any of these voters had actually moved. Many had not. A list of the purged voters’ names is available on Palast’s website. While it is too late for them to register for the upcoming midterm elections, they are still eligible to re-register for the 2020 presidential election.

Kemp used a tactic Palast calls “Purge by Postcard” to remove eligible voters from the rolls. Kemp sent a postcard that could have easily been mistaken for spam to voters who did not vote in the prior election. If a voter did not return the postcard, Kemp purged their registration without informing the voters it was happening.

Thanks to a June 2018 Supreme Court ruling that reversed the National Voter Registration Act of 1993, this practice is now legal. If a voter misses an election and fails to respond to a notice by mail, the court ruled it legal to remove them from the list of registered voters. In a dissent to the majority opinion, Justice Sonia Sotomayor called the practice part of “concerted state efforts to prevent minorities from voting and to undermine the efficacy of their votes” and said they were “an unfortunate feature of our country’s history.”

Kemp also faces a lawsuit for exposing the records of 6 million registered Georgia voters and potentially the state’s election system to foreign hackers. Kemp has become notorious for his efforts to cull voter registrations, especially those of Democratic and minority voters. Rolling Stonerecently obtained audio of Kemp speaking to donors, saying his opponent Stacey Abrams’s campaign “continues to concern us, especially if everybody uses and exercises their right to vote.”