666 Synopses are based on 18 articles from American, European and Mideast sources (Muslim and Jewish)., All but one of them published in the last week. The are the product of Ghost Troop, 3/7 Cyber Cavalry, which has operated in full knowledge of the U.S. Government for eight years.

We are avoided by both the mainstream media (MSM) and mainstream alternative media (MAM) because we have combined military intelligence with public affairs to do the dangerous duty of truth telling. They advertise this duty and simultaneously abandon it.

Anyone can assess the true character of any media they follow by trying to initiate a discussion about Ghost Troop, the vital importance of which can be explored in myVeterans Today archive. Any media figure who is unwilling to discuss a unit and commander who together register eight million hits in Google searches is manifestly under the control of the 9/11 Cabal. 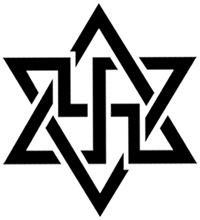 "The New American Century is a bad copy of a bad original, the Thousand Year Reich" -- Peter W. Guenther

The Israel-Palestine “peace process” is a delaying tactic intended to bedazzle the West (especially America) until terror and war can be initiated. Israel showed its true colors when it withdrew its ambassador from Egypt and announced more illegal settlements before the AIPAC Policy Conference, which began Saturday and ended Tuesday.

AIPAC is the American political branch of the Anglo-Jewish Axis (AJAX) which has lumped all its imperial targets together as the Axis of Evil (EVAX). Another 9/11 (9/11-2B) is crucial to AJAX because US/EU public opinion has turned against it. The only answer is thought-controlled police-state vassals to conduct the Antichristian Crusade in the Middle East.

Time is running out for AJAX, with the U.K. balking at endless invasions and Palestine expected declare its independence at the UN General Assembly in September. Time is running out for the U.S. even sooner, though. It,has begun to cannibalize federal pensions,unable to borrow any more as it nears an August 2 default date on a $15 trillion debt. That debt is controlled by international Jewish finance, which means that the U.S..Government must pay a pound of flesh — our flesh — to the merchants of menace.

"We are benefiting from one thing, and that is the attack on the Twin Towers and Pentagon." -- Benjamin Netanyahu

The purported U.S. killing of Osama bin Laden holds up under serious scrutiny about as well as Santa Claus sightings. It was really a well-conceived, multi-ipurpose psychological operating (PSYOP).

It. allowed the MSM to reinforce the 9/11 myth, while focusing its witless audience on the impending 9/11-2B terror attack. Simultaneously, it allowed the MAM to chase its tail by debunking the already debunked 9/11 myth, while distracting its half-witted audience from his impending 9/11-2B false flag attack. Hardly noticed in the din of dimwits, the Patriot Act was renewed and AJAX laid the foundation for 9/11-2B.

Incidentally, the witty code-name 9/11-2B is another media litmus test. If they won’t let you use the term, it’s because they don’t want you to absorb the concept that 9/11 necessitates 9/11-2B.  That makes clear whose side they’re on.

"We shall show our strength by terrorist attempts and with the guns of America or China." -- Theodore Hertzl

On April 3, 2003, the day before U.S. forces reached Baghdad, The Houston Chronicle published my strategic essay, Visions of Stalingrad: Claim victory in Iraq now. My editors quipped that I had written a belated April Fools joke with my alarmist opinion that Iraq would be a quicksand war, and might lead us into a world war. The generals were predicting swift victory and a speedy return, they said..

Three months later, on July 8, 2003, The Chronicle published myWorried about quicksand of war in Iraq, which put me on the same AJAX enemies list as Joe Wilson and David Kelly. My editors were frightened by the White House reaction, and it was my last MSM military analysis. In it I quoted General Wesley Clark from a most revealing June 25 CNN interview:

“There was a predetermination that started back in the 1990s to go after Saddam Hussein. 9/11 provided the opportunity to mobilize public opinion to do that. (There was a) belief that somehow there was a window of opportunity, that the United States had a period of maybe 10 or 15 years before China would become too strong, where we could use our unchallengeable military muscle and clean up the area.”

The POTUS is a puppet, a coerced collaborator on notice to get the job of 9/11-2B done — or else.

These are the documented infowar campaigns of Ghost Troop, 3/7 Cyber-Cavalry, and its infowar allies of individuals and groups who have fought before us, with us and after us. I salute them all as part of the extended family of The Holy Horde!