Jim Fetzer and Stephen Francis are very pleased to announce:
ACADEMIC FREEDOM CONFERENCE II: Are there Limits to Inquiry?
Should faculty be restrained from or even punished for investigating
complex and controversial events of enormous political significance?
Each speaker should have 45-50 minutes to present, leaving 10-15
more for Q&A after each session, with general discussion at the end.
ACADEMIC FREEDOM II: Are there limits to inquiry?

9:00 AM-10:AM/CT: Stephen Francis proposed the first Academic
Freedom Conference on 26 April 2014, held on the campus of the
University of Illinois-UC, where he earned a degree in sociology.  He
promotes the exercise of critical thinking and unconventional thought.
WHY DOES IT MATTER?
10:00 AM-11:00 AM/CT: Francis A. Boyle, Ph.D., noted Professor of
International Law at the University of Illinois College of Law, earned his
A.B. in Political Science from Chicago, J.D. from Harvard Law School
and his A.M. and Ph.D. in political Science from Harvard University.
11:00 AM to Noon/CT: "9/11 in the Academic Community" Noon-1:00 PM/CT: Nick Kollerstrom, Ph.D., an historian of science and
the leading expert on the 7/7 London bombings, had his appointment
at University College London terminated for undertaking scientific
research on World  War II that undermines widely-accepted accounts.
WITHIN THE ACADEMY
1:00-2:00 PM/CT: Leuren Moret earned her B.S. in geology at
U.C. Davis and an M.A. in Near Eastern Studies from Berkeley.
She completed all but her dissertation for a PhD in geosciences
at Davis. She has conducted scientific research in 42 countries.
2:00-3:00 PM/CT: Darrell Hamamoto, Ph.D., Professor of Asian

American Studies at the University of California, David, has published

extensively on the representation of Asian Americans in films and on

TV, especially in relation to political issues and freedom of expression.

3:00-4:00 PM/CT: Kevin McDonald, Ph.D., Professor of Psychology
at Cal State-Long Beach (retired), has 8 books on evolutionary theory
and has focused on group selection and the significance of different
strategies of adaptation and on social and personality development.
SOME SPECIAL CASES
4:00-5:00 PM/CT: "False Flags: From 9/11 to Sandy Hook and Beyond" 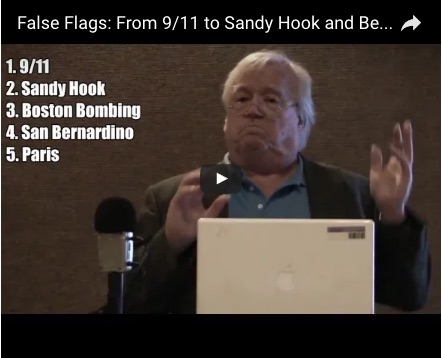 5:00-6:00 PM/CT:  Sterling Harwood, J.D., Ph.D., professor of
philosophy and attorney-at-law, has published on the moon landing
hoax, Sandy Hook and the Boston bombing, including exposing the
role of Snopes.com in misleading the public regarding those events.
6:00-7:00 PM/CT: Preston James, Ph.D., a social psychologist
from a Big Ten University, will address the importance of academic
research in an era dominated by propaganda from the mass media,
where academicians are failing to expose state-sponsored terrorism.
7:00-8:00 PM/CT: Jim Fetzer, Ph.D., a philosopher of science, has
edited a series of books that investigate the moon landing hoax, the
atrocities of 9/11, the death of Sen. Paul Wellstone, the FEMA drill at
Sandy Hook, the fakery in Boston, and other major state deceptions.
8:00- . . . . : General Discussion including questions from the audience

Those who would like to view the conference LIVE, should send
an email to info@academicfreedomconference.org indicating