9/11: Have we been bamboozled by the US government?

9/11: Have we been bamboozled?
Posted by Common Ground in Activism, June 2012, Politics | 1 comment
by Jim Fetzer 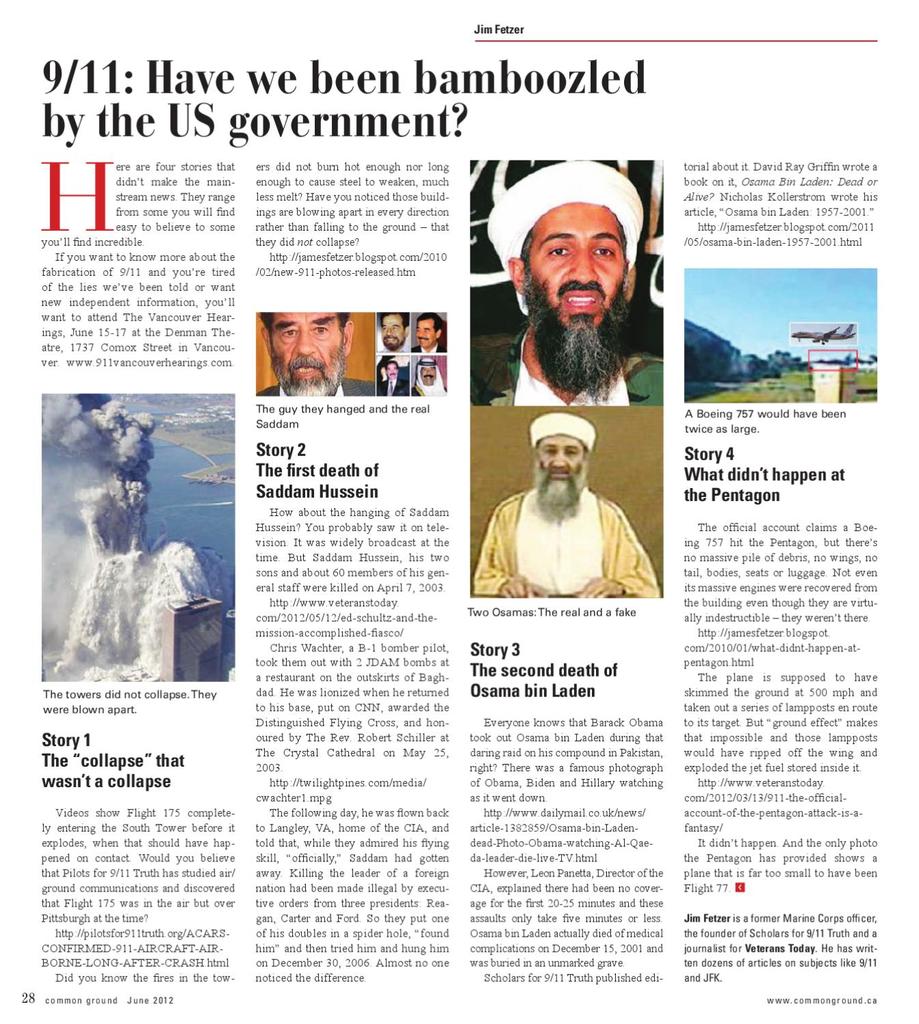 • Here are four stories that didn’t make the mainstream news. They range from some you will find easy to believe to some you’ll find incredible.
If you want to know more about the fabrication of 9/11 and you’re tired of the lies we’ve been told or want new independent information, you’ll want to attend The Vancouver Hearings, June 15-17 at the Denman Theatre, 1737 Comox Street in Vancouver. www.911vancouverhearings.com.
Story 1: The “collapse” that wasn’t a collapse
Videos show Flight 175 completely entering the South Tower before it explodes, when that should have happened on contact. Would you believe that Pilots for 9/11 Truth has studied air/ground communications and discovered that Flight 175 was in the air but over Pittsburgh at the time?
http://pilotsfor911truth.org/ ACARS-CONFIRMED-911-AIRCRAFT-AIRBORNE-LONG-AFTER-CRASH.html
Did you know the fires in the towers did not burn hot enough nor long enough to cause steel to weaken, much less melt? Have you noticed those buildings are blowing apart in every direction rather than falling to the ground – that they did not collapse?
http://jamesfetzer.blogspot.com/2010 /02/new-911-photos-released.htm
Story 2: The first death of Saddam Hussein
How about the hanging of Saddam Hussein? You probably saw it on television. It was widely broadcast at the time. But Saddam Hussein, his two sons and about 60 members of his general staff were killed on April 7, 2003.
http://www.veteranstoday.com/2012/05/12/ed-schultz-and-the-mission-...
Chris Wachter, a B-1 bomber pilot, took them out with 2 JDAM bombs at a restaurant on the outskirts of Baghdad. He was lionized when he returned to his base, put on CNN, awarded the Distinguished Flying Cross, and honoured by The Rev. Robert Schiller at The Crystal Cathedral on May 25, 2003.
http://twilightpines.com/media/cwachter1.mpg
The following day, he was flown back to Langley, VA, home of the CIA, and told that, while they admired his flying skill, “officially,” Saddam had gotten away. Killing the leader of a foreign nation had been made illegal by executive orders from three presidents: Reagan, Carter and Ford. So they put one of his doubles in a spider hole, “found him” and then tried him and hung him on December 30, 2006. Almost no one noticed the difference.
Story 3: The second death of Osama bin Laden
Everyone knows that Barack Obama took out Osama bin Laden during that daring raid on his compound in Pakistan, right? There was a famous photograph of Obama, Biden and Hillary watching as it went down.
http://www.dailymail.co.uk/news/article-1382859/Osama-bin-Laden-dea...
However, Leon Panetta, Director of the CIA, explained there had been no coverage for the first 20-25 minutes and these assaults only take five minutes or less. Osama bin Laden actually died of medical complications on December 15, 2001 and was buried in an unmarked grave.
Scholars for 9/11 Truth published editorial about it. David Ray Griffin wrote a book on it, Osama Bin Laden: Dead or Alive? Nicholas Kollerstrom wrote his article, “Osama bin Laden: 1957-2001.”
http://jamesfetzer.blogspot.com/ 2011 /05/osama-bin-laden-1957-2001.html
Story 4: What didn’t happen at the Pentagon
The official account claims a Boeing 757 hit the Pentagon, but there’s no massive pile of debris, no wings, no tail, bodies, seats or luggage. Not even its massive engines were recovered from the building even though they are virtually indestructible – they weren’t there.
http://jamesfetzer.blogspot.com/2010/01/what-didnt-happen-at-pentag...
The plane is supposed to have skimmed the ground at 500 mph and taken out a series of lampposts en route to its target. But “ground effect” makes that impossible and those lampposts would have ripped off the wing and exploded the jet fuel stored inside it.
http://www.veteranstoday.com/2012/03/ 13/911-the-official-account-of-the-pentagon-attack-is-a-fantasy/
It didn’t happen. And the only photo the Pentagon has provided shows a plane that is far too small to have been Flight 77.
–
Jim Fetzer is a former Marine Corps officer, the founder of Scholars for 9/11 Truth and a journalist for Veterans Today. He has written dozens of articles on subjects like 9/11 and JFK.