An Unbearable and Choking Hell: The Loss of Our Freedoms in the Wake of 9/11 By John W. Whitehead 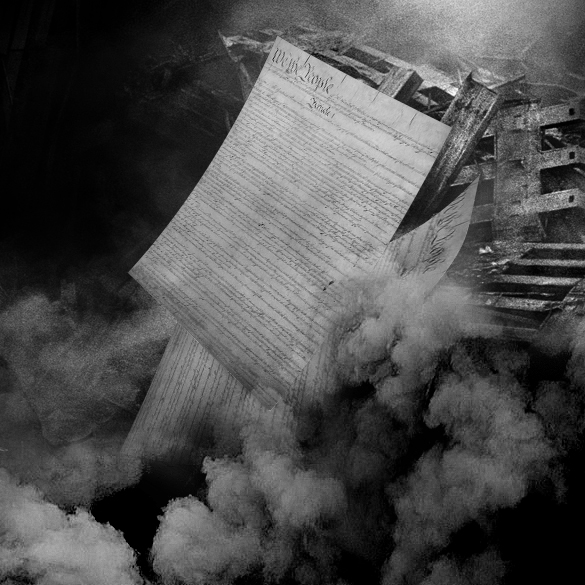 “I tell you, freedom and human rights in America are doomed. The U.S. government will lead the American people in — and the West in general — into an unbearable hell and a choking life.”—Osama bin Laden (October 2001), as reported by CNN

What a strange and harrowing road we’ve walked since September 11, 2001, littered with the debris of our once-vaunted liberties. We have gone from a nation that took great pride in being a model of a representative democracy to being a model of how to persuade a freedom-loving people to march in lockstep with a police state.

What began with the passage of the USA Patriot Act in October 2001 has snowballed into the eradication of every vital safeguard against government overreach, corruption and abuse. Since then, we have been terrorized, traumatized, and tricked into a semi-permanent state of compliance. The bogeyman’s names and faces change over time—Osama bin Laden, Saddam Hussein and now ISIS—but the end result remains the same: our unquestioning acquiescence to anything the government wants to do in exchange for the phantom promise of safety and security.

Ironically, just a short week after the 13th anniversary of the 9/11 attacks, we find ourselves commemorating the 227thanniversary of the ratification of our Constitution. Yet while there is much to mourn about the loss of our freedoms in the years since 9/11, there has been little to celebrate.

The Constitution has been steadily chipped away at, undermined, eroded, whittled down, and generally discarded to such an extent that what we are left with today is but a shadow of the robust document adopted more than two centuries ago. Most of the damage has been inflicted upon the Bill of Rights—the first ten amendments to the Constitution—which historically served as the bulwark from government abuse.

Set against a backdrop of government surveillance, militarized police, SWAT team raids, asset forfeiture, eminent domain, overcriminalization, armed surveillance drones, whole body scanners, stop and frisk searches, roving VIPR raids and the like—all sanctioned by Congress, the White House and the courts—a recitation of the Bill of Rights would understandably sound more like a eulogy to freedoms lost than an affirmation of rights we truly possess.

As I make clear in my book A Government of Wolves: The Emerging American Police State, the Constitution has been on life support for some time now. We can pretend that the Constitution, which was written to hold the government accountable, is still our governing document. However, the reality we must come to terms with is that in the America we live in today, the government does whatever it wants, freedom be damned.

Consider the state of our freedoms, and judge for yourself whether this Constitution Day should be a day of mourning, celebration or a robust call to action:

The First Amendment is supposed to protect the freedom to speak your mind and protest in peace without being bridled by the government. It also protects the freedom of the media, as well as the right to worship and pray without interference. In other words, Americans should not be silenced by the government. Yet despite the clear protections found in the First Amendment, the freedoms described therein are under constant assault. Increasingly, Americans are being arrested and charged with bogus charges such as “disrupting the peace” or “resisting arrest” for daring to film police officers engaged in harassment or abusive practices. Journalists are being prosecuted for reporting on whistleblowers. States are passing legislation to muzzle reporting on cruel and abusive corporate practices. Religious ministries are being fined for attempting to feed and house the homeless. And protesters are being tear-gassed, beaten, arrested and forced into “free speech zones.” But to the founders, all of America was a free speech zone.

The Second Amendment was intended to guarantee “the right of the people to keep and bear arms.” Yet while gun ownership has been recognized by the U.S. Supreme Court as an individual citizen right, Americans remain powerless to defend themselves against government agents armed to the teeth with military weapons. Police shootings of unarmed citizens continue to outrage communities, while little is being done to demilitarize law enforcement agencies better suited to the battlefield.

The Third Amendment reinforces the principle that civilian-elected officials are superior to the military by prohibiting the military from entering any citizen's home without “the consent of the owner.” With the police increasingly posing as military forces—complete with military weapons, assault vehicles, etc.—it is clear that we now have what the founders feared most—a violent standing army on American soil. Moreover, as a result of SWAT team raids where police invade homes, often without warrants, and injure and even kill unarmed citizens, the barrier between public and private property has done away with this critical safeguard.

The use of civil asset forfeiture schemes to swell the coffers of police forces has continued to grow in popularity among cash-strapped states. The federal government continues to strong-arm corporations into providing it with access to Americans’ private affairs, from emails and online transactions to banking and web surfing. Coming in the wake of massive leaks about the inner workings of the NSA and the massive secretive surveillance state, it was recently revealed that the government threatened to fine Yahoo $250,000 every day for failing to comply with the NSA’s mass data collection program known as PRISM.

The technological future appears to pose even greater threats to what’s left of our Fourth Amendment rights, with advances in biometric identification and microchip implants on the horizon making it that much easier for the government to track not only our movements and cyber activities but our very cellular beings. Barclays has already begun using a finger-scanner as a form of two-step authentication to give select customers access to their accounts. Similarly, Motorola has been developing thin “digital tattoos” that will ensure that a phone’s owner is the only person who may unlock it. All of this information, of course, will be available to the spying surveillance agencies.

The Fifth Amendment and the Sixth Amendment work in tandem. These amendments supposedly ensure that you are innocent until proven guilty, and government authorities cannot deprive you of your life, your liberty or your property without the right to an attorney and a fair trial before a civilian judge. However, in the new suspect society in which we live, where surveillance is the norm, these fundamental principles have been upended. And now the National Defense Authorization Act, signed into law by President Obama, allows the military to arrive at your door if the president thinks you’re a terrorist (a.k.a. extremist), place you in military detention, jail you indefinitely and restrict access to your family and your lawyer.

The Seventh Amendment guarantees citizens the right to a jury trial. However, when the populace has no idea of what’s in the Constitution—civic education has virtually disappeared from most school curriculums—that inevitably translates to an ignorant jury incapable of distinguishing justice and the law from their own preconceived notions and fears.

The Eighth Amendment is similar to the Sixth in that it is supposed to protect the rights of the accused and forbid the use of cruel and unusual punishment. However, the Supreme Court’s determination that what constitutes “cruel and unusual” should be dependent on the “evolving standards of decency that mark the progress of a maturing society” leaves us with little protection in the face of a society lacking in morals altogether. For example, if you are thrown into a military detention camp, then what constitutes cruel and unusual punishment is up to your jailers.

The Ninth Amendment provides that other rights not enumerated in the Constitution are nonetheless retained by the people. Popular sovereignty—the belief that the power to govern flows upward from the people rather than downward from the rulers—is clearly evident in this amendment. However, it has since been turned on its head by a centralized federal government that sees itself as supreme and which continues to pass more and more laws that restrict our freedoms under the pretext that it has an “important government interest” in doing so. Thus, once the government began violating the non-enumerated rights granted in the Ninth Amendment, it was only a matter of time before it began to trample the enumerated rights of the people, as explicitly spelled out in the rest of the Bill of Rights.

As for the Tenth Amendment’s reminder that the people and the states retain every authority that is not otherwise mentioned in the Constitution, that assurance of a system of government in which power is divided among local, state and national entities has long since been rendered moot by the centralized Washington, DC power elite—the president, Congress and the courts. Indeed, the federal governmental bureaucracy has grown so large that it has made local and state legislatures relatively irrelevant. Through its many agencies and regulations, the federal government has stripped states of the right to regulate countless issues that were originally governed at the local level. This distinction is further blurred by programs such as the Pentagon’s 1033 program, which distributes excess military hardware to local police stations, effectively turning them into extensions of the military.

If there is any sense to be made from this recitation of freedoms lost, it is simply this: our individual freedoms have been eviscerated so that the government’s powers could be expanded. In this regard, ironically, Osama Bin Laden was right when he warned that freedom and human rights in America are doomed, and that the U.S. government would be responsible for leading us into an “unbearable hell and a choking life.”

The choices before us are simple: We can live in the past, dwelling on what freedoms we used to enjoy and shrugging helplessly at the destruction of our liberties. We can immerse ourselves in the present, allowing ourselves to be utterly distracted by the glut of entertainment news and ever-changing headlines so that we fail to pay attention to or do anything about the government’s ongoing power-grabs. We can hang our hopes on the future, believing against all odds that someone or something—whether it be a politician, a movement, or a religious savior—will save us from inevitable ruin.

Or we can start right away by instituting changes at the local level, holding our government officials accountable to the rule of law, and resurrecting the Constitution, recognizing that if we follow our current trajectory, the picture of the future will be closer to what George Orwell likened to “a boot stamping on a human face—forever.”