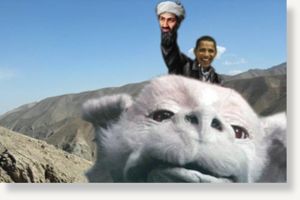 Wherever he is right now, the lanky Saudi playboy cum jihadi has every right to feel proud of the role he was co-opted to play by the pioneers of the phony war on terror. After all, he and he alone 'did' 9/11. The scramble to 'get him' for 'doing 9/11' allowed for a US military take over of Afghanistan and, with a few blatant lies repeated ad nauseam by the Western press, Iraq was overrun too. That's a lot of return on the energy invested in turning the son of a Saudi millionaire into the bete noire of the freedom-loving peoples of the world.

Once Afghanistan and Iraq were 'done' however, Osama was retreated to his mysteriously inaccessible-to-all-but-Allah mountain cave, and 'al-Qaeda' took over for the next few years of securing freedom and democracy for the Middle East, which took the unusual form of destroying as much of it as possible.

By the time 2011 rolled around, US and NATO warmongers were getting a bit peckish again, and Syria and Libya were lined up for obliteration. But al-Qaeda had become a bit 'old' and no one had seen Osama for years, except in the form of grainy videos of some guy who looked a bit like him. So from the rubble of Iraq, "ISIS" was launched onto the geopolitical scene to replace 'al-qaeda' who the USA government was now actively funding and arming in Syria and Libya.

But to facilitate his definitive exit from the stage, bin Laden was to take one last hit for the Secret Team as the victim of the 'heroic Navy Seal raid' on his 'compound' in Abbottabad, Pakistan, a popular retirement and holiday retreat for Pakistani military and civilian intelligence. This was a bizarre choice of hiding place for the world's (then) most wanted..., especially since it was located just a few kms away from the Pakistani equivalent of West Point and the CIA had an office there. Then again, very little ever makes sense in the phony war on terror that is used as a cover for imperial wars of aggression.

But anyway, the story goes that Bin Laden (or someone who looked a bit like him) was 'taken out' in a daring night raid where the rules of engagement were that if he was wearing clothes the brave Navy Seals could shoot him. Abbottabad residents were understandably skeptical of the tall tale, and when the BBC interviewed more than 50 of them only one person believed the story and several reported that, for years, they had seen tall, fair-skinned men hanging out in the compound.

But whatever the case, the whole world was told that Bin Laden was dead. But then the unthinkable happened: the US government chose not to produce a body, or even the body of some dude that looked a bit like bin Laden. Heck, no one in the CIA even had the gumption to produce a half-decent garish 'photoshop' of a dead body with a beard and turban.

And so, in one of the most tragic episodes in recent popular American history, the throngs of patriotic Americans chanting "USA! USA! USA!" in fro... would be denied the chance to see Osama's head placed atop the Washington monument.

But the best stories have a twist in the tale, and really bad ones sometimes do also.

Citing Bissonnette's description of the scene where he and another grunt-for-Empire "trained our lasers on his [Bin Laden's] chest and fired several rounds", Murphy said this was "perhaps the most measured and polite description that one could give of how operator after operator took turns dumping magazines' worth of ammunition into bin Laden's body. When all was said and done, OBL had over a hundred bullets in him, by the most conservative estimate."

So for anyone who still wonders (or cares, or remembers) why Bin Laden's body was dumped at sea or turned into drapes for the Oval Office, or shot out of a cannon into the Sun, the real reason has been revealed: it was because the body - like the story itself - was more full of holes than Swiss cheese and if produced for US public consumption, ran the risk of offending the sensibilities of the average American who, as everyone knows, has never even seen a gun, much less a bullet hole, and is a stranger to killing of any kind.

So, as you can see, Bin Laden didn't die from kidney failure in a Dubai hospital in 2001, as reported by Fox News; and he didn't die in 2011 in Pakistan. He's as alive as he ever was, and still inspiring US media hacks and 'experts' in their job of bamboozling the American people into swallowing the lies and warmongering of their political leaders. Truth be told, Osama never really needed to exist in any corporeal sense for him to serve as the rationale to launch the US empire's last desperate attempt to make the world safe for corporate and political psychopaths everywhere.

Joe Quinn is the co-author of 9/11: The Ultimate Truth (with Laura Knight-Jadczyk, 2006) and Manufactured Terror: The Boston Marathon Bombings, Sandy Hook, Aurora Shooting and Other False Flag Terror Attacks (with Niall Bradley, 2014), and the host of Sott.net's The Sott Report Videos and co-host of the 'Behind the Headlines' radio show on the Sott Radio Network.

An established web-based essayist and print author, Quinn has been writing incisive editorials for Sott.net for over 10 years. His articles have appeared on many alternative news sites and he has been interviewed on several internet radio shows and has also appeared on Iranian Press TV. His articles can also be found on his personal blog JoeQuinn.net.

News of Bin Laden's Death and Funeral 10 days ago 26 Dec 2001 Islamabad - A prominent official in the Afghan Taleban movement announced yesterday the death of Osama bin Laden, the chief of al-Qa'da organization, stating that bin Laden suffered serious complications in the lungs and died a natural and quiet death.

The official, who asked to remain anonymous, stated to The Observer of Pakistan that he had himself attended the funeral of bin Laden and saw his face prior to burial in Tora Bora 10 days ago.

He mentioned that 30 of al-Qa'da fighters attended the burial as well as members of his family and some friends from the Taleban. In the farewell ceremony to his final rest guns were fired in the air. The official stated that it is difficult to pinpoint the burial location of bin Laden because according to the Wahhabi tradition no mark is left by the grave. He stressed that it is unlikely that the American forces would ever uncover any traces of bin Laden.