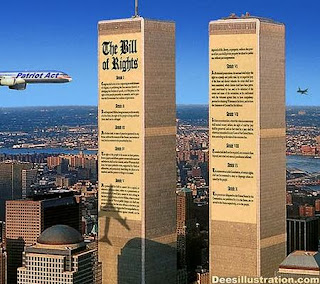 Rather than judicially review significant evidence in the events of September 11, 2001, on April 27, the 2nd Circuit Court of Appeals upheld a lower court’s dismissal of an Army Specialist’s complaint against former Vice President Dick Cheney, former Secretary of Defense Donald Rumsfeld, and former Chairman of the Joint Chiefs of Staff, Richard Myers.

One of Plaintiff April Gallop’s attorneys, William Veale, didn’t know whether to relate the decision to “Kafka, Orwell, Carroll, or Huxley,” referring to the absurdity and dearth of reason emanating from the court regarding the deadliest attack on U.S. soil the nation has ever faced.

“The Court’s decision, analogous to reviewing an Indictment in a liquor store hold-up without mentioning the guy walking in with a gun, refuses to acknowledge even the existence of the three defendants much less what they were doing that morning or saying about it afterwards,” Veale added.

Of the three judges on the panel, John Mercer Walker, Jr. is first cousin of former President George H.W. Bush and first cousin once removed of George W. Bush, who used 9/11 to manipulate public emotion to support passage of the unconstitutional PATRIOT Acts and waging illegal wars of aggression in the Middle East. According to Wikipedia, Walker shares a grandfather with the 41st president, George Herbert Walker, whose daughter married Prescott Bush. A motion to force Judge Walker’s removal from the case was denied, despite a clear conflict of interest.


The lawsuit, prepared by the Center for 9/11 Justice, accuses the defendants of conspiring to facilitate the terrorist attacks of 9/11 that killed 3000 Americans and which has resulted in the deaths of many more, due to the toxicity of the clean-up conditions at Ground Zero. The plaintiff and her son were both injured in the attack on the Pentagon, multiple videos of which the government has refused to release to the public.

Ignoring crucial evidence like the total collapse of WTC7 though not hit by a plane on September 11, the whereabouts of and statements made by the Defendants on 9/11, and the presence of thermitic material in the rubble of the Twin Towers, the court ludicrously affirmed the lower court’s finding that the case was “not plausible” and “the product of cynical delusion and fantasy.”

Additionally, the court filed an Order to Show Cause for Sanctions amounting to $15,000 for filing a “frivolous” suit, which the Center for 9/11 Justice plans to appeal.

Meanwhile, nearly 1,500 professional architects, engineers and scientists continue to assert the physical impossibility of all three World Trade Center buildings collapsing in near free fall as a result of burning jet fuel. Indeed, it is the government’s conspiracy version which is implausible, “fanciful, fantastic and delusional.”

The bravery of April Gallop in her attempt to expose the truth is as laudable as the obvious official corruption is contemptible. An unbiased judicial review of the events surrounding 9/11 will not be found in the United States. But refusal to do so only heightens global suspicion. The conspiracy and cover-up was so poorly executed that the vast majority of the planet’s population doubts the official version of events.

of course, expected outcome in a fully facist (I think I spelled that correct?) state.  I've heard that term used "fascist" in regard to Hitler, but it is fully in place in modern America.  Even the term "homeland security" should be alarming the sleeping sheeplike american population.

None of this is a surprise given human history, none whatsoever.  However, in the 1950-60s, I was optimistic simply because some of the fruits of Tom Edison, Henry Ford, etc. were improving life for average citizens and I thought that would control their fate.  However, I underestimated the oligarchs and the extent they would go to maintain power.  JFK's taking out signalled that they were going to reverse whatever forward progress the middle classes were making.  It is very, very far gone now, I hate to say.