Nobody had high hopes for Trump’s environmental policy. He had, after all, said climate changewas a hoax and sent out more than 100 skeptic tweets even before running for president. But the speed, recklessness and spite with which his administration has sought to upend environmental protections has been breathtaking. Climate change aside, even the common-sense need to protect the air we breathe and the water we drink is being challenged as the administration has unleashed a slew of regulatory rollbacks. And his science-denying, fossil-fuel-fetishising policies couldn’t come at a worse time — the UN’s Intergovernmental Panel on Climate Change has just published its most dire report yet, advising that if we don’t get to zero carbon emissions by 2050, we’ll blow past a 1.5 C temperature rise, the threshold for disaster.

Below, a list of Trump’s most reckless policies yet.

Donald Trump is promising every American a less-efficient car, so they can spend more money at the gas pump, breathe in more air pollution and cook the globe quicker with carbon emissions. “This is one of the single most damaging rollbacks attacking climate and clean-air safeguards in American history,” says Vickie Patton, general counsel at the Environmental Defense Fund. Standards set in 2012 by Barack Obama would have doubled gas mileage by 2025, but Trump is freezing those improvements (a decision even automakers like Ford and Honda have spoken out against). Plus, he’s trying to strip California of its legal right to set its own standards, which have historically functioned as a national benchmark. The administration’s own analysis of the rollback predicts the planet will warm a catastrophic 4 degrees Celsius by 2100, but argues not much can be done to stop it, so why bother trying. Controlling transportation emissions — the largest man-made source of carbon dioxide in the U.S. — would be a good start. According to the research firm Rhodium Group, this rollback could mean an annual carbon increase greater than the combined emissions of 82 percent of the countries on Earth. 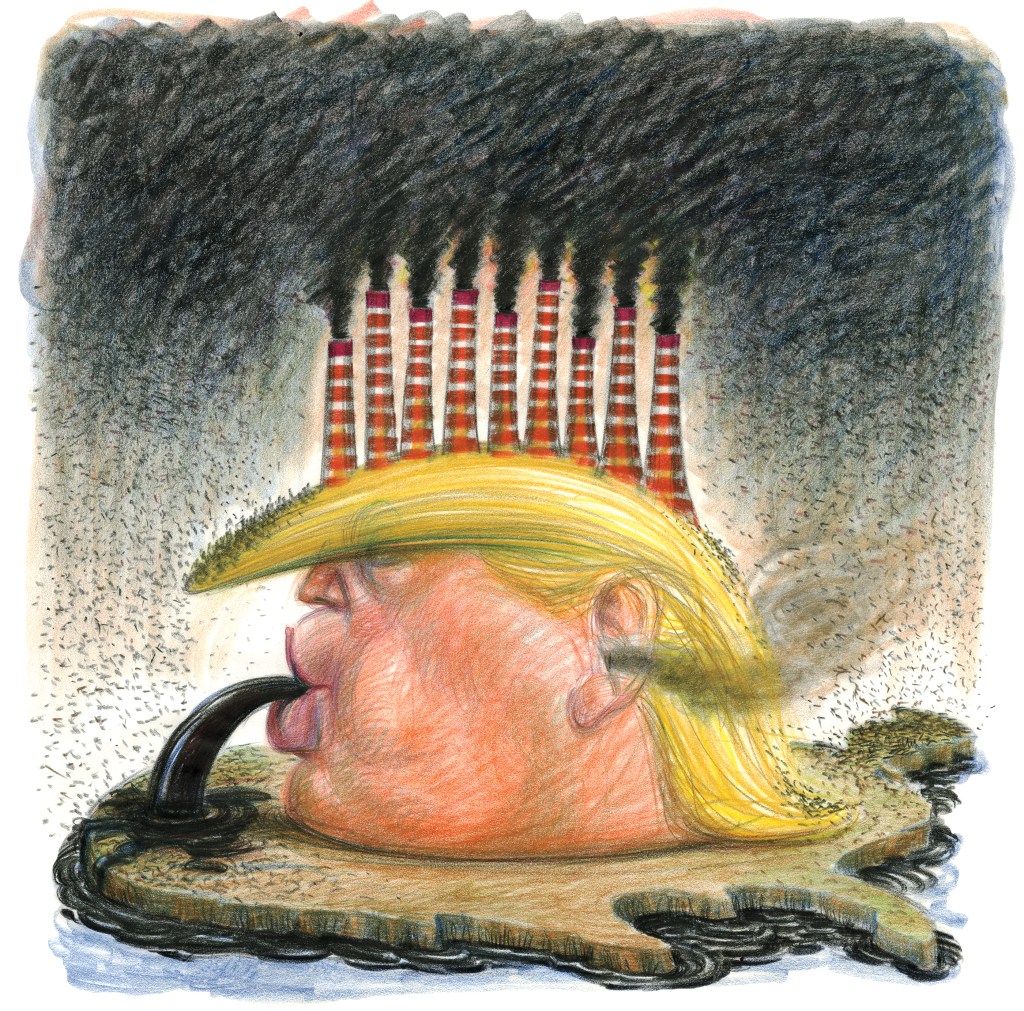 The 76 regulations and counting that Trump is rolling back read like a wish list for the coal industry. Chief among them is the dismantling of Obama’s Clean Power Plan, the first set of federal limits ever placed on pollution from coal- and gas-fired power plants. Its goal was to reduce the energy grid’s carbon emissions 32 percent below 2005 levels, and it was the linchpin to meeting our commitment to the Paris Agreement, the pact signed by every other country in the world to control global temperature rise. Obama’s plan was also projected to prevent as many as 90,000 child asthma attacks a year, while Trump’s could release 12 times as much carbon, and may cause 1,400 premature deaths a year due to pollution. 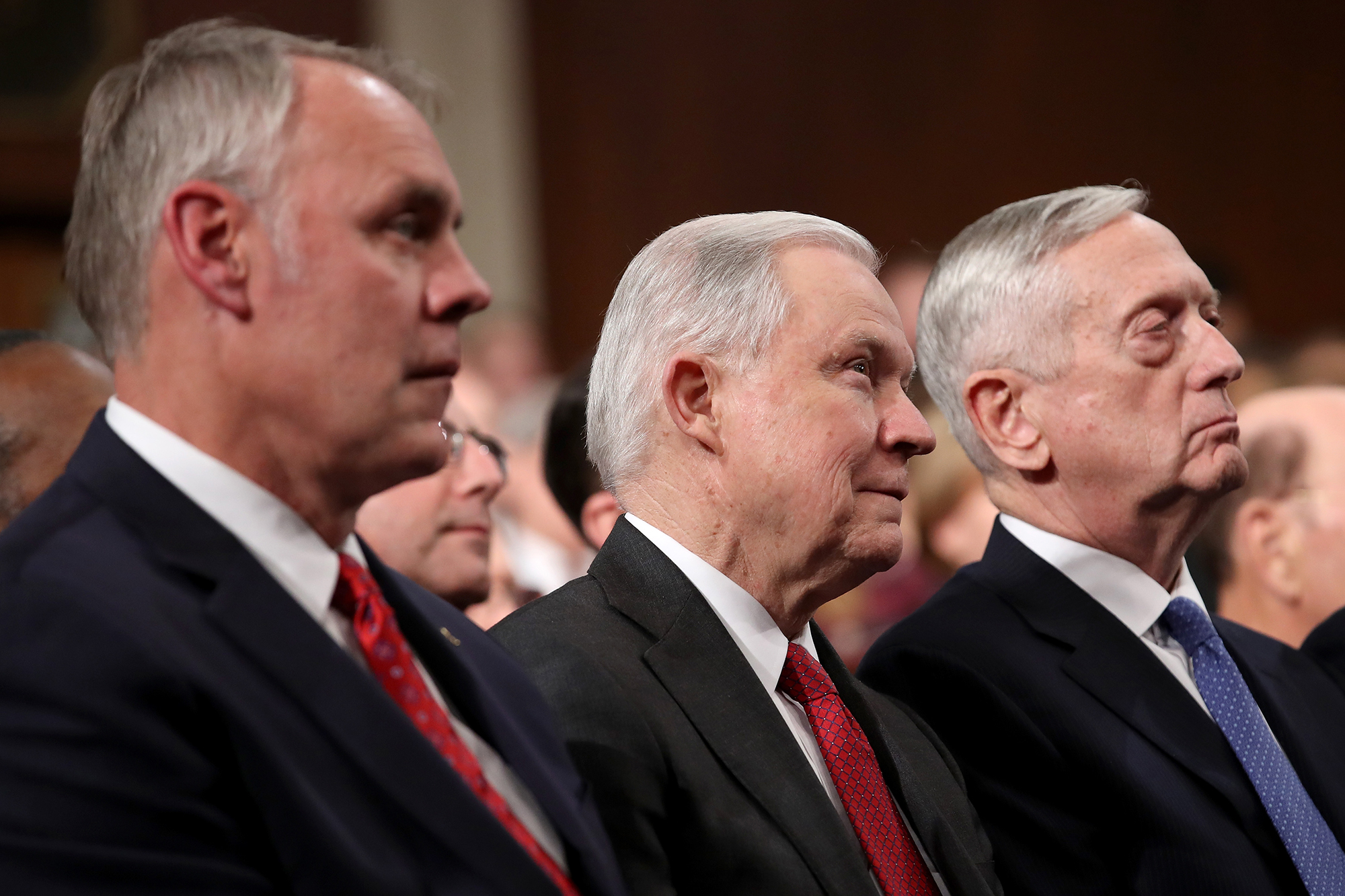 White House Cabinet Departures Rumored to Continue After the Midterms

Republicans and Democrats Are Also Divided on Sexual Fantasies

Coal plants have been closing at a rapid clip since natural gas and renewables have taken over more and more of the energy market – and Trump is doing everything he can to stop it. The Energy Department’s plan to subsidize coal power plants was defeated last year, but a leaked White House memo shows the administration is considering an even more drastic measure: requiring power-grid operators to use coal and nuclear power plants. It’s a big-government interference into a competitive market — the last thing a “pro-business” Republican president should be proposing. The plan would essentially make consumers spend more money on dirtier power. “It’s insanity,” says Pat Gallagher, legal director of the Sierra Club. “The Trump administration is not just rolling back Obama rules, they’re basically trying to crush marketplace opposition in favor of their cronies.”

They don’t get as much attention as carbon dioxide, but both methane and hydrofluorocarbons (HFCs) dwarf CO2’s heat-trapping ability. And methane leaks from oil and gas operators have become the second-largest source of industrial greenhouse-gas emissions in the U.S. But Trump is trying to kill regulations that forced operators to reduce the leaks, a rollback that could mean 380,000 more tons of pollution, the equivalent of 2.6 million cars. The EPA is also trying to roll back regulations on HFCs (emitted from air conditioners, refrigerators and aerosols). The “superpollutant” is so powerful, however, that without a worldwide phase-down it could cause a half-degree Celsius of warming by 2100 — enough to single-handedly torpedo the Paris Agreement. And then there’s the corruption: Former EPA head Scott Pruitt, who was forced to step down in July amid 13 investigations into his scandalous tenure, was lobbied about HFCs by J. Steven Hart, whose wife Pruitt rented a Capitol Hill condo from at a third of the market rate.

In the blitz toward “energy dominance,” Trump has not only been tearing down regulations but also feverishly exploring for more fossil fuels. In 2017, the government offered 11.9 million acres of public land for oil and gas leasing, a 500 percent increase from the year before. In August, Trump offered the largest oil-and-gas-lease auction ever, for 77 million acres in the Gulf of Mexico. “It’s all up for grabs, and this administration insists on grabbing it,” says Nada Culver of the Wilderness Society.

Trump also has his eye on land not yet available for grabbing: He ordered reviews of 27 national monuments and 11 marine sanctuaries, and already shrank monuments in Utah by some 2 million acres. “Their playbook is to remove any restrictions on public lands that may interfere with the oil and gas industry,” says Gallagher of the Sierra Club, who also notes there’s been “a bonanza of pipeline development.” Just after his inauguration, Trump approved the fiercely protested Dakota Access and Keystone XL pipelines. Both would spell disaster if they leaked. The Keystone, for example, runs over the Ogallala aquifer, the largest expanse of freshwater on the continent.

The Trump administration is reconsidering a 2011 pollution control on mercury and other toxins emitted from coal plants. Mercury is particularly dangerous for pregnant women and can damage fetal brain health. The regulation has successfully reduced emissions of the pollutant by 70 percent, and it could prevent as many as 11,000 premature deaths from heart and lung disease annually. Meanwhile, the EPA has already weakened enforcement: EPA assistant administrator Bill Wehrum — a longtime lawyer for chemical and oil companies — issued a guidance making it easier for plants to turn off their pollution controls, which, according to one study, could more than quadruple the output of toxins and disproportionately impact the poor. “That’s true of most Trump rollbacks,” says Gallagher, “because they favor heavy industries,” which are closer to disadvantaged communities. 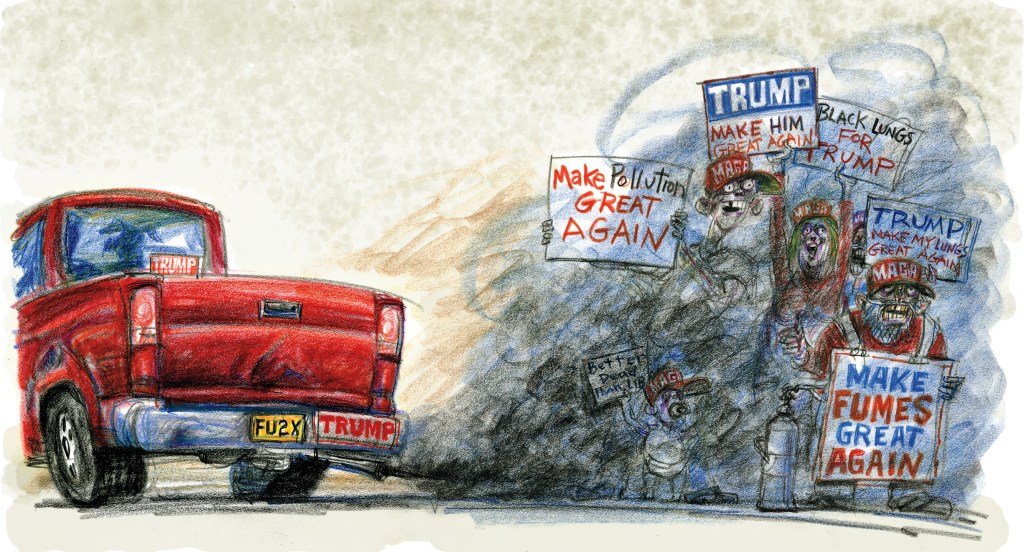 When mountaintops are blown up to mine coal, the debris that falls into the valleys below is laden with toxic heavy metals like arsenic and lead, which seep into streams. One of Trump’s first actions in office was to sign the repeal of a law that held coal-mining companies accountable for the polluted waterways. The toxins are being tied to learning disabilities, kidney stones, tooth loss, cancer and, according to one lawsuit, “unremitting diarrhea.” The health impacts are woefully understudied, however, and likely to remain that way: The administration also canceled funding for a major study on the health risks of mountaintop-removal mining.

In another giveaway to coal, the administration weakened already modest standards for coal-ash disposal from power plants. “The ash has arsenic and other toxins, and is often stored in unlined pits that can leak in surface water and groundwater, and in fact do,” says water-policy expert Jon Devine of the Natural Resources Defense Council. “Some of these are heavy metals that can cause cancer, result in lowered IQ in children, deformities, harm to fish and wildlife — nasty stuff.”

Perhaps even more troubling, Trump is working to reverse a crucial 2015 change to the Clean Water Act that would expand federal protection to an estimated 2 million miles of streams and 20 million acres of wetlands, which contribute to the drinking water of 117 million Americans.

Since 1973, the Endangered Species Act has been one of the crowning achievements of the environmental movement, with a 90 percent success rate in protecting roughly 1,600 species, including the bald eagle. But the administration has proposed a raft of rule changes that could gut the statute’s effectiveness and clear the way for yet more drilling and mining. “Extractive industries and this push for energy dominance have just pushed every other consideration aside,” says Bob Dreher of the nonprofit Defenders of Wildlife. The new rules could shrink protected habitats, remove default protections for threatened species and force listing decisions to include economic data, undermining the bedrock principle that decisions should be based solely on the best available science. “You can’t do a cost-benefit analysis on life,” says Dreher. Plus, the administration is gearing up to look for oil in the Arctic National Wildlife Refuge. “They risk killing polar bear cubs, interfering with caribou migration,” says Gallagher of the Sierra Club. “It’s the saddest juxtaposition of our natural heritage versus Trump’s insane oil and gas frenzy.”

Tearing up regulations is a little easier if you can toss out the science they’re based on. The EPA has proposed mandating that only scientific studies with “publicly available” data can be used in drafting regulations. It sounds innocuous, but it could suppress a wide swath of research — anything containing the confidential medical information of participants — including landmark peer-reviewed studies that undergird a range of regulations on air and water pollutants, as well as chemicals and pesticides. These studies “have long been the target of a fringe set of actors in industry,” says Patton of the Environmental Defense Fund. “Those fringe forces have found their voices in the Trump administration.”