Why Was There No Jet Fuel at the Flight 93 Crash Site?

Why Was There No Jet Fuel at the Flight 93 Crash Site? 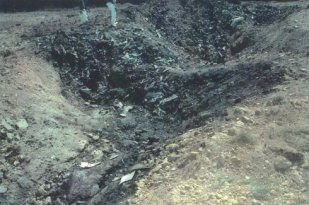 The official account of United Airlines Flight 93 is a remarkable story of heroism and selfless bravery. On September 11, 2001, 46 minutes into its journey from Newark, New Jersey to San Francisco, California, Flight 93 was supposedly taken over by four fanatical Muslim hijackers, members of Osama bin Laden's al-Qaeda terrorist network. Their plan was to crash it into a target in Washington, DC, most likely the White House or the U.S. Capitol building. However, passengers and crew members on board made a series of phone calls to relatives and others on the ground, and were told of the attacks on the World Trade Center and Pentagon. They consequently made the courageous decision to try and retake control of the plane. Following passenger Todd Beamer's now-famous call to action, "Let's roll!" the attempt began. Though they failed to take back the plane, the passengers forced the hijackers to crash Flight 93 into the ground in a sparsely populated area of rural Pennsylvania. All on board the plane were killed, but countless lives in Washington were saved.

Then-President Bush subsequently acknowledged the significance of the actions of these passengers. He said: "In those moments, and many times since, terrorists have learned that Americans are courageous and will not be intimidated. We will fight them with everything we have." [1] On the fifth anniversary of 9/11, he said the men and women on Flight 93 "gave America our first victory in the war on terror." [2] Addressing the nation two months after the attacks, Bush concluded a speech by referring to Todd Beamer's famous last words, saying: "We will, no doubt, face new challenges. But we have our marching orders: My fellow Americans, let's roll." [3]

Extraordinary though the story of Flight 93 is, under closer scrutiny we find it is highly problematic. Many aspects are questionable, and this is perhaps most apparent when we examine the scene where Flight 93 supposedly crashed. Although the plane was reportedly "heavily laden with jet fuel" when it "slammed at about 575 mph almost straight down into a rolling patch of grassy land," examination of the soil and groundwater around the crash site found no evidence of contamination by jet fuel. [4]

NO JET FUEL AT THE CRASH SITE
Six days after 9/11, the Pennsylvania Department of Environmental Protection (DEP) began taking soil samples around the Flight 93 crash site, to test for jet fuel, hydraulic fluids, and other hazardous materials. At least three test wells were sunk to monitor groundwater for signs of contamination. [5]

According to the National Transportation Safety Board, Flight 93 had about 37,500 pounds of fuel remaining when it crashed, which was around 77 percent of its fuel load on takeoff. [6] Yet the DEP tests found no evidence of this huge volume of jet fuel at the crash site. Two weeks after the tests began, DEP spokeswoman Betsy Mallison reported that "no contamination has been discovered." [7] She said that, "whether it burned away or evaporated," much of the jet fuel assumed to have spilled at the site "seems to have dissipated." [8]

FUEL SUPPOSEDLY BURNED UP, BUT FIRES WERE SMALL
DEP Secretary David E. Hess suggested a possible explanation for this absence of jet fuel, which was that "most of the hazardous fluids were consumed by the crash's fire." [9] A particular problem with this explanation is that some of the first witnesses to arrive at the scene noticed only very small fires there.

Faye Hahn was a local emergency medical technician whose company was quickly dispatched to the crash site. However, she has recalled, "Arriving on the scene" there was "no smoke, no fire." [10] Jeff Phillips, who worked at a nearby salvage yard, heard a colleague calling out, "Plane down, plane down!" and then headed out with another employee to locate the crash site. He has recalled, "We had to have been at least among the first 20 people" to have arrived there. Yet, he said, the crater where Flight 93 supposedly hit the ground "was just a spot that had a little fire on it, which was the airplane fuel burning." [11] And Lee Purbaugh, who worked at a nearby scrap yard, was also one of the first to arrive. Reportedly, he "scrambled down the bluff from the scrap metal company and ran 300 yards to the place where the plane had crashed." He found "a smoking hole in the ground. But why wasn't there more fire?" [12]

Are these tiny fires what we would expect if a large commercial aircraft had just crashed there? And could they really have burned up 37,500 pounds of jet fuel?

PAPER SURVIVES THE FIRES
Hess's theory that "most of the hazardous fluids were consumed by the crash's fire" is further complicated by the fact that, though evidence of a huge volume of jet fuel was not found, large amounts of paper (which is, of course, highly flammable) survived, and were discovered around the crash site. [13]

Roger Bailey, a local volunteer firefighter, has said that as he walked through the crash's debris field, he found "mail. I guess there were 5,000 pounds of mail on board. Mail was scattered everywhere. ... It seemed like every piece of mail that I looked at was from Blue Cross and Blue Shield." [14] Faye Hahn confirmed that, after she arrived at the crash scene, she saw "papers everywhere," and she'd "bent over to check many papers on the ground and found that they were pieces of mail." [15] Journalist and author Jere Longman has claimed that Flight 93 "had been carrying thousands of pounds of mail," and added that "pieces had scattered about, envelopes with California addresses, magazines, paper on the ground and in the trees, some of the envelopes burned, some still in the same unharmed condition in which they were mailed." [16] Also found at the crash scene was a "Bible that, oddly, was unscorched," and the charred remains of the visa of alleged hijacker Ziad Jarrah. [17]

If the fires had been able to consume 37,500 pounds of jet fuel, surely they would have also burned up all this paper?

AN ALTERNATIVE EXPLANATION
How do we make sense of this evidence--the absence of jet fuel in the soil and groundwater, yet the mass of paper debris that survived? Was this site really where United Airlines Flight 93--a Boeing 757-200 weighing maybe over 100 tons--crashed into the ground?

Another possible explanation to consider is that this scene was somehow fabricated to give the appearance that a large commercial jet plane had crashed there. Debris, including large amounts of paper, was planted. One witness in fact described the crater where Flight 93 supposedly hit the ground as appearing "like someone took a scrap truck, dug a 10-foot ditch, and dumped all this trash into it." [18]

If this is what happened, it would explain why early witnesses at the scene noticed a particularly strong smell of jet fuel in the air. They later recalled this smell being "overpowering," "incredibly strong," "really strong," or "just horrendous." [19] According to Jere Longman, "The pungency of unburned jet fuel was so strong that it blistered the lips of investigators." [20] Yet, as we have seen, tests found no fuel in the soil. So, rather than being the result of a Boeing 757 having crashed, might this odor have been created by some other means? The purpose was to help create the impression that a plane had crashed, so as to convince the first responders of this, and get information supporting this possibility into initial news reports.

By the time--weeks later--that contradictory evidence came to light, the idea that Flight 93 crashed at this site in rural Pennsylvania had become widely accepted, and was deeply entrenched in the public consciousness. New evidence that disproved this idea, such as the absence of jet fuel in the soil and groundwater, could then be ignored as if it were trivial.

Yet evidence like this is of critical importance. If Flight 93 did not crash into that field, as was officially claimed, then we need to find out what happened to it, and what the fate was of its unfortunate passengers and crew.

Comment by Thoth II on September 13, 2010 at 7:27am
I remember several jetliner crashes before 911 like the everglades crash, and whole warehouse were filled with airplane parts by the NTSB for careful inspection.

None of this was done on 911, and that is a dead give away that these Boeings were not crashed in the spots they were reported to have crashed, at all 4 sites. If the official lie was the truth, there is ZERO doubt that they would have had the NTSB assemble all these plane parts in 4 massive hangers and even by now invited the public in to inspect these crash reconstructions to prove the official account true. But every time the govt. has something to cover up, none of these routine things are done.