Farewell to DEWs: After 111 pages of comments on my 5-star review of WHERE DID THE TOWERS GO?

Farewell to DEWs (from page 111 of comments on my 5-star review of WHERE DID THE TOWERS GO?):

Childishness and immaturity appear to be all-pervasive among the followers of the Judy Wood cult. I wish it were not so, but the evidence is overwhelming. Here I have posted a 5-STAR REVIEW and done my best to give her credit for what she has accomplished. Her discussion of nukes is clearly inadequate, at least in part because SHE HAS NOT IDENTIFIED ALL THE EVIDENCE, AFTER ALL. I was wrong about that, but she has ignored the content of dust samples gathered by the USGS. I have at least three problems with her work: (1) she denies she has a theory, which, if true, means she cannot explain the evidence she presents; (2) her definition of DEWs as devices that produce far more than the energy produced by conventional demolitions and are directed fits mini & micro nukes; and (3) she seems witless and infantile in discussing her work, which she does by offering QUESTIONS instead of ANSWERS, where the 43 propositions with which she concludes DO NOT EXPLAIN THE DATA. For those who are more serious about research on 9/11 than those who are posting the kinds of rubbish that we find here, try "Judy Wood and DEWs: The Good, the Bad, and the Ugly" and "9/11 Truth will out: The Vancouver Hearings II". But members of cults are never satisfied, even when I have given her more than a fair shake, since she appears unaware of proof that it was done with nukes.

More NONSENSE ! The Vancouver Hearings ? What a joke ! Those were not 'hearings'. At best it could be called a conference. And when will you be taking all your evidence into a UNITED STATES court of law? Answer : Never. You had your event in Canada due to Smith-Mundt Act - plain and simple. The truth is out !

he he uncle fester the clown is funny heheheheheh
Veterans for 911 Truth Group / We are MIGHTY!
http://beforeitsnews.com/9-11-and-ground-zero/2012/11/veterans-for-...

I am in agreement with James, he may not like the quality of the blue logo plane photo but what can you do? If the photo was better, someone would have tossed it. ALL flight 175 photos are missing from the first NIST release and you can see the gaps in the numbering meaning photo 1,2,5,6 means photo 4 is gone and that's flight 175. Photo 5 and 6 show the aftermath. ALL the NIST FOIA releases later show ALL the file name were edited SO you can't tell which photo was removed. What does Woods say about this? Nothing! Add that to list.

The nuke issue: building parts and magic planes did not create the earthquakes! Judy is only willing to talk about ONE earthquake, the .06 earthquake close to building 7. All the others are GONE from her script! All the details have been removed from the USGS and Kim Young's report. Depth data and location ALL have been generalized. Judy some how does not talk about this. Add that to the list of what Judy is hiding. SHE HAS NOT IDENTIFIED ALL THE EVIDENCE and activity goes after the evidence we do have. Why? Thermite fireballs are seen and video taped for everyone to see. What does Judy do, nothing it does not exist. Add that to the list. James I believe these people are really not trying to learn anything. All they have to do is press play and all fireballs in world exist for them witness and they just can't do it. Why? Because Judy is a powerful brain washer. Talking in rhythmic circles about evidence and narrating what she wants you to believe. ALL the OTHER maps i.e the body part and heat map, which was handed out to everyone, does not exist in Judy's mind or this book. Why? Because people just don't know any better.

Earthquakes don't turn buildings to DUST. Your question is answered starting with p. 66.

ALL 7 WTC buildings were destroyed/damaged/dustified that day.

An 8th building (Bankers Trust) was taken down due to ongoing effects (massive rusting, etc).

Bath tub intact after the dustification of the massive twin towers. Major earthquakes would have severely damaged the bathtub.

Planes are just a distraction. The latest distraction is that silly 9/11 crash test.

Thermite (in all its various forms) was debunked YEARS ago.

The evidence presented in "Where did the Towers Go"? is rock solid. Even the trolls try to steal her work and claim it as their own.

As I use the word "cult", it refers to a group (formal or informal) typified by (a) core dogmas, (b) mystic leaders, (c) intolerance of criticism, (d) disposition to attack those who question the faith, and (e) devotion to the group even when confronted with well-founded criticism. Examples that come to mind include the Branch Davidians (David Koresh) and, even more appropriately, Scientology (L. Ron Hubbard), with its pretensions toward science. Consider how these conditions apply to Judy's group.

Among their characteristics are their members' excessively zealous, unquestioning commitment to the identity and leadership of the group; the exploitative manipulation of group members; and harm or the threat of harm to those who are perceived to threaten the group, which can be directed inward or directed outward depending on the source of the threat, as Jonestown (Jim Jones) exemplifies. As anyone can confirm from this thread, Judy and her buddies satisfy these requirements in spades.

I take great offense at your remarks. No one here is in a religious cult , and a person's religion (or lack there of) has nothing to do with the truth about 9/11.

The truth doesn't have sides. It stands alone. And it certainly stands the test of time.

The 9/11 Truth Movement in its various forms has changed 'stories' more times than one can reasonably count.

Thank goodness this thread has been well documented, as you sir ( and your collegues) have called anyone that supports Dr. Wood's work a host of various names and insults.

The term "douche bag" comes to mind : (and I mean it in the most respectful way. Really, I do)

generally refers to a male with a certain combination of obnoxious characteristics related to attitude, social ineptitude, public behavior, or outward presentation.

She does not offer an explanation of what happened. Her definition of a "directed energy weapon" as one that produces overwhelmingly more energy than conventional explosives and is directed, in this context, is trivial: anyone who watches the Twin Towers blowing apart in every direction from the top down appreciates that this required overwhelmingly more than conventional explosives--where mini and micro nukes provide that AND can be directed! So not only has she NOT shown that mini or micro nukes were NOT used but she advances a definition of DEWs that is satisfied by mini or micro nukes.

I complimented her in my review for having identified all of the evidence that has to be explained by an adequate theory. But that is simply WRONG. She ignores the content of the dust samples collected by the USGS, including Barium and Strontium, Thorium and Uranium, Lithium and Lanthanum, Yttrium, Chromium and Tritium, which means that she has identified SOME BUT NOT ALL OF THE EVIDENCE THAT HAS TO BE EXPLAINED, where her book DID NOT DESERVE A 5-STAR REVIEW. So I was wrong to regard her work in such a positive fashion, because it turns out to have been sloppy and incomplete in this crucial dimension.

So she combines a trivial truth about the quantity of energy required with the use of a vague definition of DEWs that, like The Force, can have a powerful effect on the weak-minded. I have pointed out that this issue is explained and discussed in several places, including most importantly "9/11 Truth will out: The Vancouver Hearings II", yet none of you have responded to this obvious point. Instead, you display intolerance of criticism, a disposition to attack those who question your faith, and devotion to the group even in the face of well-founded criticism. You regard your leaders--especially Judy Wood--as mystical figures even when your core beliefs turn out to be either trivial or false.

The definition of "DEWs" that she has advanced is trivial because it can be satisfied by a wide range of alternative causal mechanisms, including especially mini and micro nukes. When "DEWs" are construed as OTHER THAN mini or micro nukes, the use of DEWs is falsified by evidence found in the samples of dust collected by the USGS. I have explained all of this many times now, where you persist in attacking me rather than admitting that Judy Wood was wrong because her position is either trivial or false. That is not a scientific attitude but behavior characteristic of a cult. Q.E.D.

This 911 WTC photo reveals the search for nuclear activity, radioactivity, in and near the circular/oval hole(s) in Liberty Street, holes most like the ones in WTC-6 and WTC-5 and elsewhere. Notice the use of HazMat suits by the USA Govt. perhaps CIA or FBI 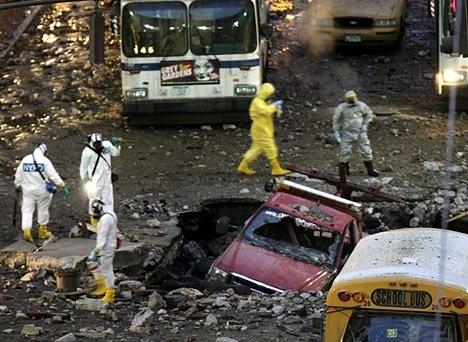 agents, and notice the nuclear activity devices they are wearing, carrying, and pointing. Very, very overpowering evidence that mini nukes were used, a no brainer conclusion as evidenced from this most incriminating photo: Directed shaped cutter mini nukes that produce oval holes planted to explode norrowly straight upwards to take everything in their paths. Let's see someone explain this photo in any other way!!!!

Thoth II, I couldn't agree more. I left a comment a few moments ago stating that Hutchison hasn't discovered anything and that physicists globally, well funded and on the cutting edge of science at Yale, Harvard, Cornell, Sandia, Lawrence Livermore, Oak Ridge, the DoE and dozens more college physics departments are not only aware of Hutchisons grainy videos but have experimented and written about effects well beyond Hutchisons. The Petawatt Threshold, laser technology, nuclear propulsion technology and 100s more areas of study are being pursued in the name of physics and chemistry across the globe. Hutchison is years behind BUT the key problem with all of these beam technologies is power and they require gargantuan supplies of electricity; a problem we haven't yet solved.

(1) she denies she has a theory, which, if true, means she cannot explain the evidence she presents;

here is where Judy Wood should have taken the time, and been super serious about, (like the Thothman did) learning a good scientific technique like Abductivism using inference to the best explanation.  Had she done that, she would understand that gathering the evidece, which she did with great expertise, and formulating hypotheses to explain that evidence, are two distinct tasks; and ne'er the twain shall meet necessarily : just because she is good at data gathering in no way means she'll also hit a grand slam and offer the best explanation.  In fact, Chuck Boldwyn has done the best and most throough research in this regard.

(2) her definition of DEWs as devices that produce far more than the energy produced by conventional demolitions and are directed fits mini & micro nukes; and

back in the day of the Morgan Reynolds debate, I did a calculation that it would require a Hoover Dam's worth of power to dustify the towers in 10 seconds, and I stand by my calc.  DEWs just could not do this, not remotely, what would be their energy source.  This question is already answered with nuclear, we've known since Hiroshima what nukes can do.