AA2. Some of the principal data that must be explained according to Dr. Judy Wood's web site 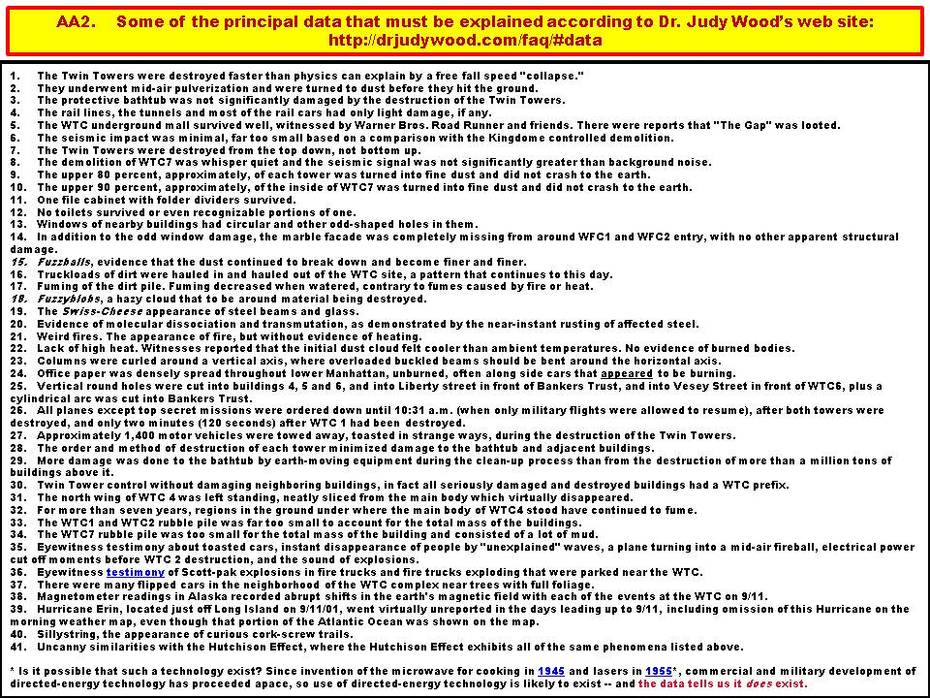 15-20-: I'm afraid Judy-Morgan are going to take the high ground on those because they've claimed ownership of those terms.  But those words mean NOTHING in a scientific context.  If they claim ownership of those words, they'll of course say they are only possible by something mysterious like a DEW.  But there are no fuzzballs, just an ongoing chemical reaction.  Yes, dirt was pile on , but that could be to contain fallout radiation or absorb unreacted chemicals.  There is no molecular dissociation and transmutation, only chemical reactions, I thought everyone knew rust is a result of a chemical reaction, not nuclear transmutation.  They don't even know their basic science.

#22: I myself think most of the explosive energy was eaten up in fracturing the concrete and none left to increase the internal energy (temperature), so most of the event we witnessed was fracturing of concrete mainly and not production of high temperature clouds.

#24 is no mystery at all, of course paper was thrown all over the place, it's so light weight it would get dispersed easily.

#27 they say the cars were toasted, but I see a lot of evidence of exploding engine blocks and those were probably being acted on by thermate

I just think they are biasing the argument by making everything appear MYSTERIOUS when actually it is just plain old brute force chemistry and physics going on, so of course they make people think there is some mysterious explanation.

Comment by Chuck Boldwyn on January 28, 2012 at 9:19pm
Check out each of the 41 or 43 Summary Points that Dr. Judy Wood's website and book,
"Where Did TheTowers Go: Evidence Of Direced Free-Energy Technology on 9/11",
states must be explained by some unified, all-encompassing, all-explaining Theory or Hypothesis and which Judy & Morgan and all of the Theoretical DEWs Devotees claim can only be explained by DEWs and some form of Hutchison Field Effects and be explained by nothing else in this Universe.
Morgan and I, Chuck Boldwyn will be discussing all of the 40 plus Points, in order, 1 through 43, with Jim Fetzer posing the 43 questions, statements, or Points, as we pose our views.
We do agree of some of the Points, perhaps 10 to 15 of the 43, but the rest we currently disagree on, and those differences will be aired at that time: Feb 6, 2012 on the "The Real Deal"
Hopefully, some listeners may call in to pose their views, agreements or disagreements.
It should be a most interesting and "Truth Rvealing" show......
U