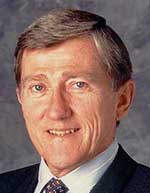 John Lehman, 9-11, and Israel
by Victor Thorn
When a commission was established to investigate the 9-11 terror attacks (the one Henry Kissinger was initially appointed to head), it was supposed to be “independent” and free of ties to any party that may have been involved in or profited from this tragic event. But anyone who has done research on the backgrounds of this twelve-member committee soon discovered that these individuals were anything but independent. In fact, their final findings were reminiscent of the Warren Report – a complete whitewash that concealed, rather than revealed, what actually took place.

One of the panel members was former Navy Secretary John Lehman, who recently said to the San Bernardino Sun, “the Pentagon knows exactly where Osama bin Laden is hiding … it just can’t get him.”

After reading this quote, the first question I immediately asked was: what kind of person would utter such a statement? Well, it seems that Lehman cut his teeth during the Nixon administration as a National Security Council senior staff member to none other than Henry Kissinger. He also has ties to another nasty fellow – Richard Perle – during his stint in the Navy. In fact, Lehman once owned a company named Abington Corporation, and his partner was none other than the so-called Prince of Darkness himself, Richard Perle.

Dr. Richard Saba, an international relations consultant, wrote of this partnership in the Arab News on June 26, 2004: “In 1983, a mysterious package of materials in an unmarked envelope was allegedly delivered to New York Times investigative reporter Jeff Garth. The materials led to a major New York Times story about the then-U.S. Secretary of the Navy John Lehman. The materials pointed out that Lehman had supposedly taken payments from an Israeli arms company while he was Secretary of the Navy.” Saba continues, “Perle, who was also a U.S. government official during this period in 1983, had also allegedly received money from the same Israeli arms company.”

British journalist Claudia Wright reiterated these charges: “Well-known in Israeli military circles, [Lehman] sat on the board of a Philadelphia think tank run by American supporters of Israel, and operated a highly profitable defense consulting company with business ties to the Israeli arms industry.”

Lehman’s ties to Israel become even more sinister when we consider the infamous case of Jonathan Pollard, a civilian analyst who betrayed our country by stealing secrets and passing them along to our supposed ally. In his article, 9-11 and the Neo-Cons, Tom Wilson writes, “When Pollard’s espionage was exposed, the following individuals were suspected by then-Secretary of Defense Caspar Weinberger’s office of the general counsel of being Pollard’s co-conspirators: Richard Perle, Paul Wolfowitz, Douglas Feith, and John Lehman.” Of course Douglas Feith is suspected of being at the core of our most recent Israel-Pentagon spy scandal; and all of these men were architects of our Iraqi war debacle.

None of these revelations should surprise anyone, though, because Lehman and his neo-con colleagues have had a long history of traitorous behavior against the U.S. (in favor of Israel). They have also been doing the Zionist’s dirty work for decades by pushing a pro-military agenda in the Middle East (i.e. waging war against Israel’s enemies). And as you will see, John Lehman has been in the thick of this skullduggery since the early 1970s; yet somehow he was considered “independent” enough to appear on the 9-11 commission.