Hard evidence exists that American Airlines Flight 77 did not strike the Pentagon on September 11, 2001 -- the laws of science refute the official account of 9/11

The security camera video of "Flight 77" released by the Pentagon has one frame showing something -- labeled "Approaching Aircraft" -- moving parallel to the ground about 100 yards in front of the Pentagon.

This is the U.S. government's evidence to support its claim that American Airlines Flight 77 struck the Pentagon on September 11, 2001.

However, the government's own records -- Pentagon transcripts, official reports, flight data recorder, and the laws of science belie "The 9/11 Commission Report".

Just minutes after the alleged attack, standing in front of the Pentagon on September 11, 2001, Jamie McIntyre, CNN's senior Pentagon correspondent since November 1992, reported: "From my close up inspection there's no evidence of a plane having crashed anywhere near the Pentagon. . . . . The only pieces left that you can see are small enough that you could pick up in your hand. There are no large tail sections, wing sections, fuselage -- nothing like that anywhere around which would indicate that the entire plane crashed into the side of the Pentagon." 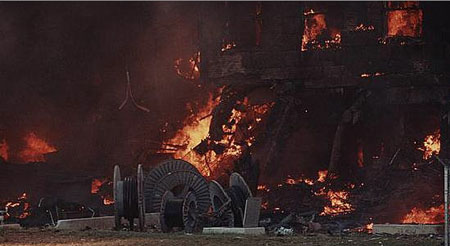 This news report apparently was not rebroadcast, and a few years later McIntyre claimed on CNN (Wolf Blitzer's show) that he had been taken out of context.

Lt Col Karen Kwiatowski, who from her fifth-floor, B-ring office at the Pentagon, witnessed "an unforgettable fireball, 20 to 30 feet in diameter" confirms McIntyre's account.

Writing in "9/11 and American Empire: Intellectuals Speak Out," Kwiatowski noted, "a strange absence of airliner debris, there was no sign of the kind of damage to the Pentagon structure one would expect from the impact of a large airliner. This visible evidence or lack thereof may also have been apparent to the secretary of defense, who in an unfortunate slip of the tongue referred to the aircraft that slammed into the Pentagon as a 'missile'."

Pentagon employee April Gallop, whose "desk was roughly 40 feet from the point where the plane allegedly hit the outside wall" stated in a sworn complaint (before the U.S. District Court Southern District of New York): "As she sat down to work there was an explosion, then another; walls collapsed and the ceiling fell in. Hit in the head, she was able to grab the baby and make her way towards the daylight showing through a blasted opening in the outside wall. There was no airplane wreckage and no burning airplane fuel anywhere; only rubble and dust."

Barbara Honegger, military affairs journalist, reported in her personal capacity that a pilot sent by Gen Larry Arnold (NORAD) "reported back that there was no evidence that a plane had hit the building." She added, "Multiple standard-issue, battery-operated wall clocks . . . stopped between 9:31 and 9:32-1/2 on September 11" -- a few minutes before Flight 77 that is alleged to have struck the Pentagon at 9:38.

A diagram (derived from the "Pentagon Building Performance Report", Figure 7.9) indicates a "Slab deflected upward" which is consistent with either an explosion below the slab, or an upward blow by a hard object.

Major General Albert Stubblebine, U.S. Army (ret) -- former Commanding General of U.S. Army Intelligence and Security Command, and head of Imagery Interpretation for Scientific and Technical Intelligence -- stated in a video interview, "I don't know exactly what hit it, but I do know, from the photographs that I have analyzed and looked at very, very carefully, it was not an airplane."

At the September 12, 2001, Dept. of Defense (DoD) News Briefing by Assistant Secretary of Defense, Victoria Clarke, Ed Plaugher (fire chief of Arlington County), and others, "American Airlines", "Flight 77", "Boeing 757" were not even mentioned.

How significant is this?

Fire chief Ed Plaugher was asked by a reporter, "Is there anything left of the aircraft at all?" Plaugher responded, "there are some small pieces of aircraft ... there's no fuselage sections and that sort of thing."

When asked, "Chief, there are small pieces of the plane virtually all over, out over the highway, tiny pieces. Would you say the plane exploded, virtually exploded on impact due to the fuel", Plaugher reponded "You know, I'd rather not comment on that."

The transcript reveals that reporters were being "threatened or, in fact, handcuffed and dragged away".

This year, the transcript of the September 12, 2001 News Briefing was removed from the DoD website.

At the September 15, 2001, Dept. of Defense (DoD) News Briefing by Mr. Lee Evey, Pentagon Renovation Manager, Rear Adm. Craig R. Quigley, deputy assistant secretary of Defense for Public Affairs, and others, it was apparent that there were lingering doubts about what had struck the Pentagon on September 11.

Apparently, no one asked how "the nose of the aircraft" (a relatively weak component of the aircraft) remained sufficiently intact to penetrate the C Ring -- the E Ring is the outermost ring. 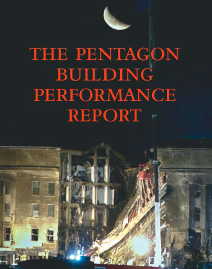 This implies that whatever struck the Pentagon, couldn't have been a Boeing 757.

As previously noted, these wings were not found outside the Pentagon!

From the preceding it is clear that the "Pentagon Building Performance Report" -- prepared by the American Society of Civil Engineers and the Structural Engineering Institute, and released by the U.S. government's National Institute of Standards and Technology -- contradicts the official account of 9/11. 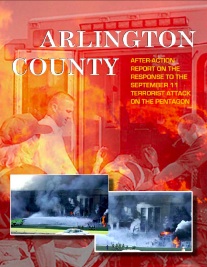 The "Arlington County After-Action Report" describes the occurrence of an event at the Pentagon minutes before the alleged strike of Flight 77, and the presence of Fort Myer Unit 161 at the Pentagon prior to impact.

Annex A, Page A-4 of this report states: "Captain Dennis Gilroy and his team were already on station at the Pentagon when Flight #77 slammed into it, just beyond the heliport. Foam 161 caught fire and suffered a flat tire from flying debris. Firefighters Mark Skipper and Alan Wallace were outside the vehicle at impact and received burns and lacerations. . . . Captain Gilroy called the Fort Myer Fire Department, reporting for the first time the actual location of the crash."

Did Fort Myer Unit 161 go the Pentagon following an explosion -- prior to the alleged strike of Flight 77?

It is consistent with the reporter's question at the September 12 News Briefing, "Chief, there are small pieces of the plane virtually all over, out over the highway, tiny pieces. Would you say the plane exploded, virtually exploded on impact due to the fuel"?

It is consistent with April Gallop's sworn complaint that "she was able to grab the baby and make her way towards the daylight showing through a blasted opening in the outside wall. There was no airplane wreckage and no burning airplane fuel anywhere; only rubble and dust."

It is consistent with military affairs journalist Barbara Honegger's account of "Multiple standard-issue, battery-operated wall clocks . . . stopped between 9:31 and 9:32-1/2 on September 11."

Fort Myer Unit 161's arrival at the Pentagon to put out a fire prior to the strike by "Flight 77" is not consistent with the official account of 9/11.

Pilots for 9/11 Truth state: "video captured by the parking gate cam is in direct conflict with the Aircraft Flight Data Recorder data released by the NTSB" (National Transportation Safety Board) pursuant to a Freedom of Information Act request. The "Pentagon Building Performance Report" states (page 14): "A Pentagon security camera located near the northwest corner of the building recorded the aircraft as it approached the building. Five photographs (figures 3.3 through 3.7), taken approximately one second apart, show the approaching aircraft and the ensuing fireball associated with the initial impact."

On page 35 of this report we're told, "The site data indicate that the aircraft fuselage impacted the building at column line 14 at an angle of approximately 42 degrees to the normal to the face of the building, at or slightly below the second-story slab."

However, the NTSB animation (January 2002), according to Pilots for 9/11 Truth, shows an aircraft flying north of the Navy Annex, not leveling off, and being too high to have hit the Pentagon.

When confronted with this discrepancy, NTSB Chief Jim Potter said: "I have no comment on the existence of the discrepancies."

Two Pentagon security officers state categorically that a plane (which they believed was Flight 77) flew north of the Citgo gas station (now the Navy Exchange) located west of the Pentagon on South Joyce Street at Columbia Pike, rather than flying south of the gas station as stated in official reports.

G-Force Would Have Destroyed the Boeing 757

Flight 77 is alleged to have flown over Columbia Pike and the Virginia Department of Transportation communications tower located 1143 yards west of the Pentagon before striking the Pentagon at "530 miles per hour". 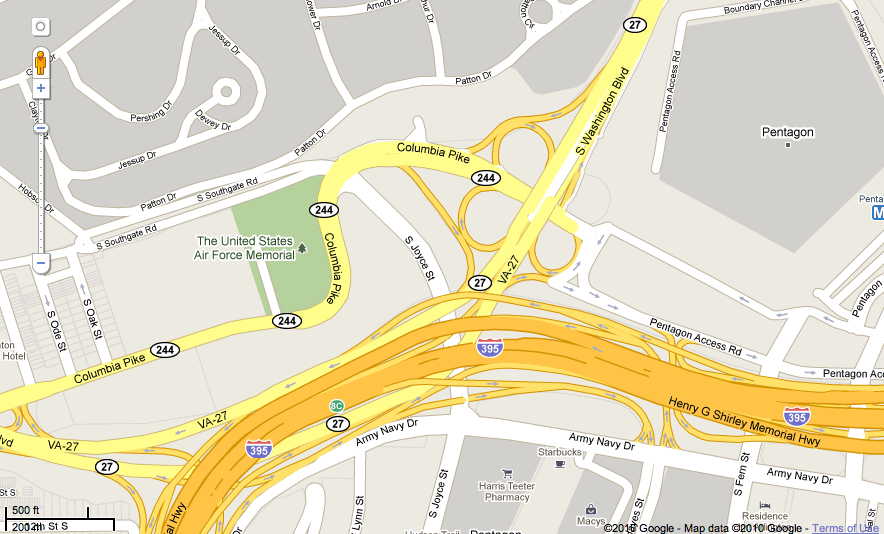 Flight 77 would then have been over Pentagon grounds with about 500 feet remaining to level out and to strike the Pentagon "slightly below the second floor slab" at "an angle of approximately 42 degrees".

The Columbia Pike and VA-27 intersection presents a roughly 20 feet tall barrier in the alleged path of Flight 77.

Leaving aside the discrepancies between the official account of Flight 77, and the Flight Data Recorder (which NTSB refuses to answer), Pilots for 9/11 Truth calculated the force on the Boeing 757 at 34 Gs, i.e. 34 times the force due to gravity, at the point that it would have to transition from its downward flight to level flight.

With a virtual weight of about 8.5 million pounds, Flight 77 could not have leveled off before striking the Pentagon. It would have crashed at the intersection of Columbia Pike and VA-27. This alone is sufficient to refute the official account of "Flight 77" -- Flight 77 cannot have violated the laws of science.

Pilots for 9/11 Truth did another calculation by lowering the height of "Flight 77" below that shown by the FDR. They lowered it to the top of the VDOT antenna.

With this very conservative case, they calculated the force on the Boeing 757 at 11.2 Gs. "11.2 Gs was never recorded in the FDR. 11.2 Gs would rip the aircraft apart" they wrote.

With Flight 77 alleged to have struck the Pentagon at "an angle of approximately 42 degrees", the flight path and the damage path cannot possibly form a straight line.

Flying at "an angle of approximately 42 degrees" the Boeing 757's starboard wing would have struck the west wall of the Pentagon before the port wing. This would cause the aircraft to veer to the right, and the damage path would be in line with the aircraft's new heading -- not with the aircraft's heading prior to impact (assuming -- miraculously -- the plane was able to penetrate the C Ring).

However, the "Pentagon Building Performance Report" Figures 6.2 and 6.6 show that the flight path and damage path (damage path also illustrated in the "Arlington County After Action Report", page 23) do form a straight line extending from the center-line of the fuselage of the aircraft to where the "the nose of the aircraft broke through this innermost wall of C Ring". 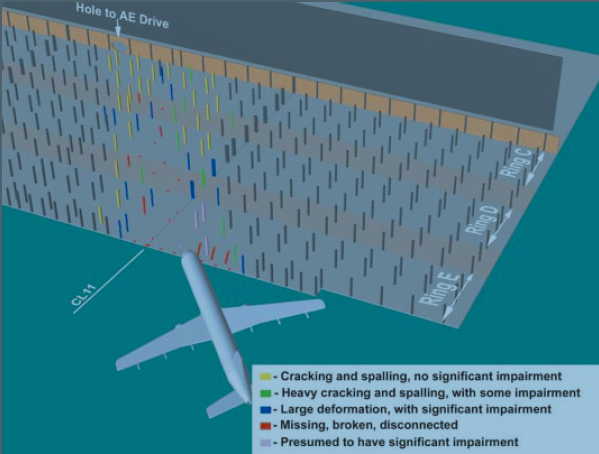 Therefore, what looks like a puff of smoke -- labeled "Approaching Aircraft" in the security camera video, cannot possibly be a Boeing 757.

To conclude, the official account of Flight 77 -- supported only by one frame from a security camera showing a puff of something approaching the Pentagon -- is contradicted by the transcripts of Pentagon News Briefings conducted on September 12 and 15; by the "Pentagon Building Performance Report"; by the "Arlington County After-Action Report"; by the FBI's exhibit on phone calls from Flight 77; and by the Flight Data Recorder provided by the NTSB.

The official account of Flight 77 contradicts the laws of science. Flight 77 could not have withstood the calculated G-force when it would have had to level out -- about 100 yards before striking the Pentagon -- with "the top of the fuselage of the aircraft . . . no more than approximately 20 ft above the ground". The flight path of a Boeing 757 traveling at "530 miles per hour", striking the Pentagon at "an angle of approximately 42 degrees", and the resulting damage path inside the Pentagon cannot possibly form a straight line as depicted in the Pentagon Building Performance Report.

On September 10, 2001, then Secretary of Defense Donald Rumsfeld admitted that the Pentagon "cannot track $2.3 trillion in transactions". It is alleged that the section of the Pentagon destroyed on September 11, 2001 housed records of DoD spending, and the personnel for monitoring that spending.