Sinclair’s takeover of local news, in one striking map..

The pro-Trump media company is about to become bigger.

Sinclair Broadcasting Group is already one of the most powerful media companies in the country. It owns nearly 200 local television stations in nearly 100 markets — and it’s about to get even more powerful.

The unabashedly pro-Trump media conglomerate received a lot of attention after it forced its local news anchors to read an anti-media promo. These promos were edited together by Deadspin’s Timothy Burke to show a chilling montage of local anchors “concerned about the troubling trend of irresponsible, one-sided news stories plaguing our country.”

So we gave you a tool to see whether Sinclair currently owns any of your local stations. But that doesn’t quite capture the extent of how powerful Sinclair is about to be. Sinclair’s purchase of Tribune Media and its 42 local stations will soon go through if approved by regulators. That would allow the company to reach more than 72 percent of American households.

The map below shows exactly how far this reach is:

The FCC doesn’t allow companies to reach more than 39 percent of households. This is how Sinclair is getting around that.

The Federal Communications Commission (FCC) doesn’t allow a single company to own stations that reach more than 39 percent of US television homes.

Sinclair’s pro-Trump news is taking over local TV. See if they own ...


So the question is: How is Sinclair going to be allowed to reach more than 70 percent of households?

There are two main reasons:

When Sinclair purchases Tribune, it will own stations in some of the largest US markets.

But to get under the 39 percent cap, Sinclair said in an FCC filing that it intends to sell stations in eight markets, including New York, Chicago, and Seattle. However, that doesn’t mean those stations won’t be influenced by Sinclair.

So Sinclair won’t own these stations but still plans to run them to reach those massive audiences.

2) Sinclair is taking advantage of an FCC loophole

The other way Sinclair is getting around this is through an FCC loophole.

If you don’t want the details, the short version is that the FCC calculates audience reachusing an outdated measure.

American television stations use one of two types of waves: VHF waves, which travel farther, and UHF waves, which don’t travel as far. So the FCC used to only count half of the UHF audience when it measured audiences.

In the late 2000s, America switched to digital broadcasting, and UHF waves were good for transmitting crisp pictures on our digital TVs. So in 2016, FCC started to measure UHF and VHF the same way.

But FCC Chair Ajit Pai reversed that. This meant that big companies could own more local stations without hitting that 39 percent limit. And as Jeff Guo wrote for Vox last year, Pai hinted that this was a stopgap measure until they could increase the 39 percent ownership cap to allow big companies to have even more influence.


Sinclair is about to get incredibly powerful

If Fox News is national media with a conservative bent, Sinclair may be looking to become the same for local news.

And if this sale goes through, Sinclair will reach nearly three-fourths of TV-watching audiences — and those people watch a lot more local news than cable news: 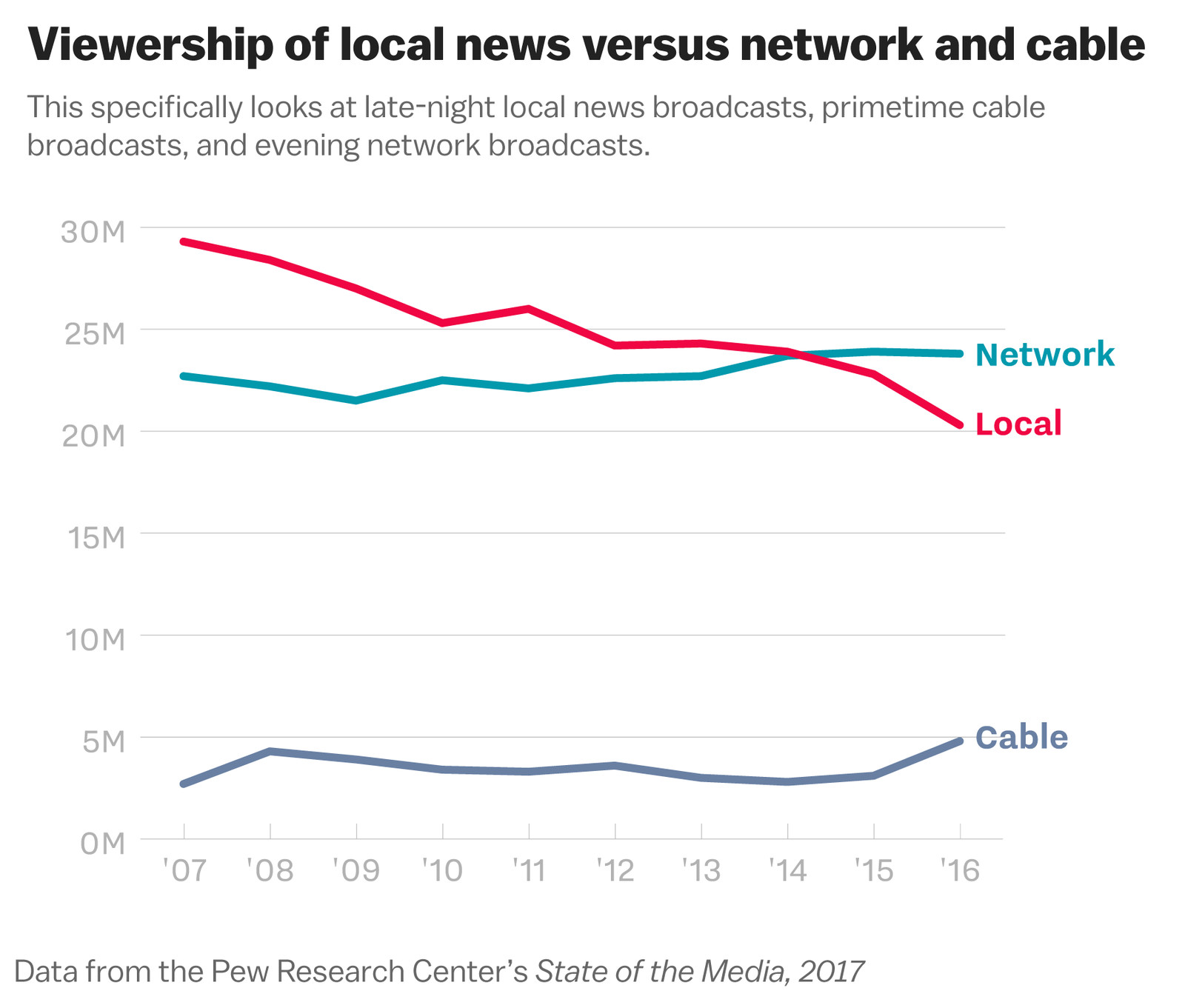 The montage of local news anchors reading their scripts is about the most obvious thing Sinclair could have done to announce its arrival. But, as I’ve written before, Sinclair’s impact will likely be harder to stop.


This isn’t to demean the journalists who work at Sinclair, some of whom have tried to resist. It doesn’t mean everything they report is compromised. But this centralization of local news, especially by a company with a political agenda, is a troubling trend.