The federal judge overseeing litigation between the city and workers at ground zero on Friday rejected a settlement, telling lawyers that it did not provide enough compensation to plaintiffs and needed to be renegotiated under his supervision. 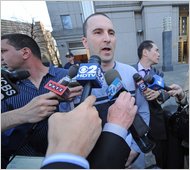 Mike Damato, a laborer who has respiratory problems attributed to his work at ground zero, testified on Friday in federal court in Manhattan.

The decision by the judge, Alvin K. Hellerstein of United States District Court in Manhattan, came in a hearing barely a week after the settlement was announced following more than six years of legal maneuvering. The settlement provided for payouts totaling $575 million to $657.5 million in cases filed by some 10,000 rescue and cleanup workers who say they suffered health damages from toiling at ground zero after the 2001 terrorist attack.

“This is no ego trip for me,” Judge Hellerstein told a packed but hushed courtroom moments after hearing emotional testimony from some of the plaintiffs. “This is work. I will preside over a process that’s fair.”

The judge had previously given signs that he intended to closely oversee how the settlement was carried out to ensure that individual workers were treated fairly. On Monday he issued an order stripping lawyers on the two sides of sole authority to choose an administrator and a medical panel to evaluate the plaintiffs’ claims and said court approval would be needed.

The judge said those fees should be paid by the same insurance company that is to cover any settlement and has been covering legal fees incurred by the city. Its reserves stand at $1.1 billion.

Judge Hellerstein also said that the terms of the settlement were too complicated for the plaintiffs to be able to reach an “intelligent decision” on whether to accept it.

“There has to be additional negotiations to come up with a better and fair settlement,” he said. “I will not preside over a settlement based on fear or ignorance.”

Lawyers for the two sides rushed out of the courtroom after the two-hour hearing and had no immediate comment. But plaintiffs who had appeared before the judge welcomed his stance.

“The speakers got inside of his heart,” said Candiace Baker, 42, a former police detective who spoke of logging 400 hours of overtime searching for bodies in the rubble of the World Trade Center.

Ms. Baker, who says she suffers from respiratory problems and breast cancer developed after 9/11, said that although “more delays mean that the more time that passes, the more illnesses unfold,” she agreed with the judge’s goal of getting more compensation for the plaintiffs.

The settlement, reached on March 11, required approval from 95 percent of the plaintiffs to take effect. Judge Hellerstein said that once a new one was negotiated, he would make himself available to plaintiffs to explain their options, rather than leave that to their lawyers.

“I want transparency. I want accountability. I want judicial control over this process,” he said at the hearing. “They’ve got to come up with an agreement under judicial supervision that will make us all proud.”

Legal experts said that whether Judge Hellerstein had the authority to reject the settlement was subject to debate.

Richard A. Nagareda, a professor at Vanderbilt University Law School who specializes in mass personal-injury litigation, said that while other district court judges had reserved the right to review settlement agreements in similar mass tort cases, that authority had not been tested yet on appeal.

Mr. Nagareda added that judges in other aggregate cases had also reduced the fees paid to plaintiffs’ lawyers by factoring in the work and time saved by settling a large number of cases at once and avoiding individual trials.

In a statement, Christine LaSala, president and chief executive of the WTC Captive Insurance Company, which oversees the $1.1 billion payout fund, lamented the decision.

“I am very disappointed that the judge has now made it more difficult, if not impossible, for the people bringing these claims to obtain compensation and a settlement,” she said. “We heard people today plead for an end to this litigation that was fair and just. That is what we focused on and achieved.

“We will consider what the judge has said and consult with our insureds and try to find a way forward,” she said.

Tearful testimony by plaintiffs, and summaries of letters and phone calls in which some described their medical and financial struggles, seemed to have weighed heavily on the judge. Among the letters Judge Hellerstein read aloud was one from Rudy Washington, a former deputy mayor who said he suffered from asthma and chronic infections after spending every day at ground zero for more than three months.

Although some plaintiffs said they considered the settlement fair and talked about the peace of mind that some form of financial security would bring to their families, many of the 11 speakers delved sorrowfully into the impact of their illnesses.

“I’ve lost the career I dreamed of my entire life,” said Keith Delmar, 35, a former firefighter who testified in his uniform.

After the testimony and motions by lawyers were completed, Judge Hellerstein rose and praised the workers who responded on 9/11 as “our heroes.”