As the founder of Scholars for 9/11 Truth, I was invited to Buenos Aires
last year to make several presentations about 9/11 and the death of JFK.
I addressed a small group, but there were seven stories in the press,
including two in Telam, the news service of the Republic of Argentina.

This year I was invited back, and Telam reprinted one of those stories,
"Los 15 puntos que refutan la versión oficial sobre los atentados del 11
de septiembre"(google), which summarizes crucial discoveries by members
of Scholars, whose web site I maintain at 911scholars.org.

The event this time took place at The National Library of the Republic of
Argentina. There were more than 200 guests and five (5) TV crews there,
where journalists and other experts participated. This is indicative of
the growing interest in 9/11 among the people of Argentina.

The program began with a panel of three journalists. Then Oscar Abudara
Bini, leader of 9/11 Truth Argentina, spoke, followed by Kurt Sonnenfeld,
the official videographer for FEMA, and finally Korey Rowe, the producer
of "Loose Change: An American Coup", which would be shown the next day.

That took about an hour and a half and, after a brief break, I presented
my lecture which, with Spanish translation, ran just short of two hours:

The final 15 minutes--Thierry Meyssan was unable to attend--were used by
Luis D'Elía, a prominent, and sometimes controversial, Argentine political
figure, who had been instrumental in obtaining funding for the event from
the government. He explained why it was important for the nation and the
world. Published comments that have appeared so far have been favorable. 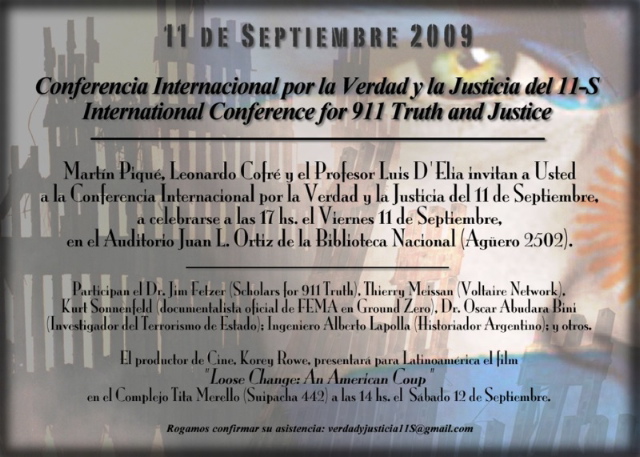 Comment by James H. Fetzer on September 20, 2009 at 2:05pm
Let me see if we can track footage of the presentation, which was translated slide by slide. I believe that
the whole presentation is going to be archived shortly. So I will also post a link when it becomes available.

"THE FILE ASSOCIATED WITH THIS LINK HAS EXPIRED.."

I'm interested in the Spanish version and if any videi clip exists, that as well. Even short snapshots in Spanish would be great..to send out to Spanish speaking friends in various countries.