9/11 and the Rise of the Global Police State 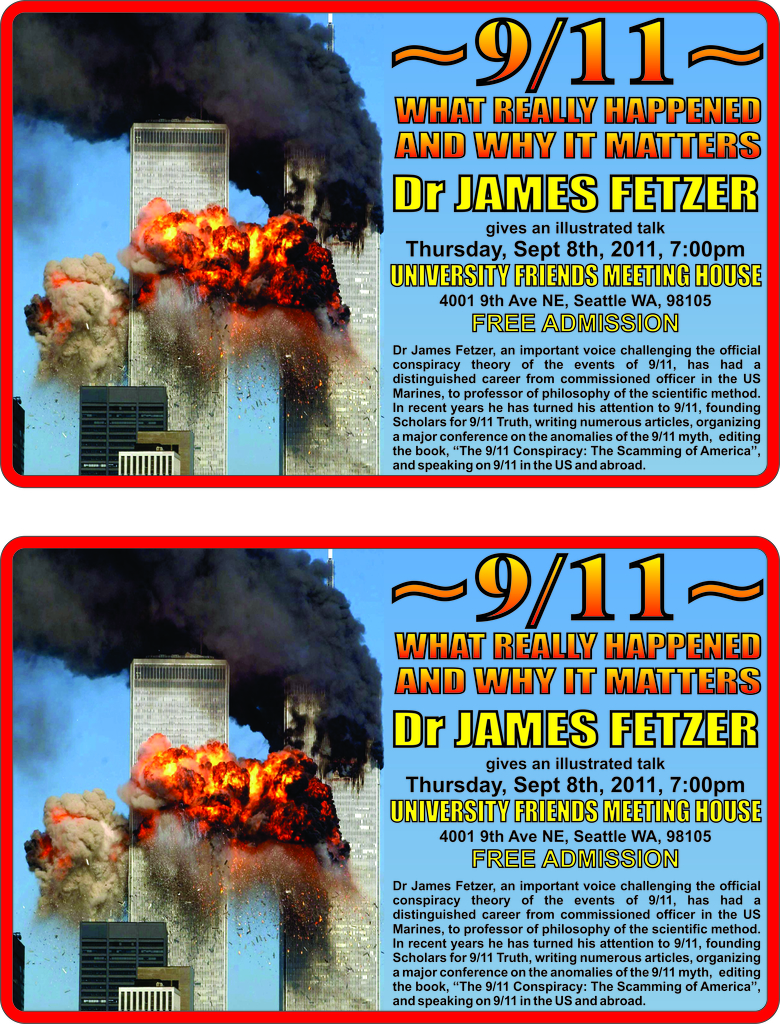 Kevin Barrett and I will be there.  If you can make it, we'd love to see you, too! “Ten Years Later and the Questions Remain” is the theme of an event scheduled for the rotunda of the state capitol on Sunday, September 11 from 1 to 4 p.m.

The event will be held on the tenth anniversary of 9/11. It is sponsored by Minnesota 9/11 Truth, a local citizen’s organization that has questioned the…

Jim Fetzer of Scholars for 9/11 Truth and "The Real Deal" radio podcast and Killtown, the noted 9/11 researcher, will be Dean Hartwell's guests on D'Anne Burley's "The Detectors" Friday, September 2, 2011.…

Nanothermite: If It Doesn’t Fit, You Must Acquit!

Those who remember the 1995 O.J. Simpson trial will recall the gloves that turned out to be too small for O.J.’s hands when the long-awaited day of trying them on in the courtroom finally arrived. The blood-soaked gloves (one found at the crime scene and the other outside O.J.’s house in Brentwood the morning after his wife was murdered) were gloated over as “hard evidence” by the prosecution and the media, much like the…

Joshua Blakeney on TERRORISM: HOW THE WEST CAN WIN by Benjamin Netanyahu

I recently acquired a book written and edited by Benjamin Netanyahu which was published in 1986. The book is entitled Terrorism: How the West Can Win.…
Continue

Mini-nukes at the Murrah Building?

Benjamin Netanyahu address to US Congress

min Netanyahu , new leader of the Likud party, addresses a joint session of our miserable Congress:   http://www.youtube.com/watch?v=UefytaWUwQ4&feature=related  ....  http://www.americanrhetoric.com/speeches/netanyahu.htm  ....  The Likud party has hijacked Israel and the United States to further their cause of world…

(PilotsFor911Truth.org) - Since our article on WTC Aircraft Speed Analysis was written, more evidence has been gathered to reflect the research provided by Pilots For 9/11 Truth and in the film "9/11: World Trade Center Attack". A more thorough understanding and…

If Joe Keith is wrong, why hasn't Anthony Lawson pocked the $5,000 Joe has offered to prove it?

If Joe Keith is wrong, why hasn't Anthony Lawson pocketed the $5,000 Joe has offered to prove it?

Joe Keith has actually offered $5,000 to anyone who can show that he is wrong about his argument. If Anthony Lawson could do that, he could pocket a nice sum. So why hasn’t Anthony collected $5,000?…

What has happened to Anthony Lawson?

What Has Happened To Veterans Today?
By Anthony Lawson
http://rense.com/general94/vtrn.htm

A RESPONSE TO ANTHONY LAWSON

Well, let’s see where things stand, Anthony. So far as I can tell, you have yet to refute any of my arguments. You spend a lot of time attacking Joe Keith while ignoring his observations.  Moreover, since, as I…

I have read your review of my review of your book.  I welcome the dialogue on the subject of…

I believe this is a very patriotic and worthwhile group.  As far as I can tell, it is apolitical.  I recommend everyone watch

don't be buying any of those nasty waterproof match boxes  .....   wouldn't want to be deemed a terrorist or something.

More evidence of no planes

I have found the following observation, or question, to be effective in leading people to question the OCT belief in planes;
Why do none of the pictures of a plane approaching a tower show any reflection in the glass of the tower?

What Were the Names of The World Trade Center Victims?


A recent inquiry by a member of Congress has raised a question about the authenticity of the official records of the names of those who died at the World Trade Center on September 11, 2001.